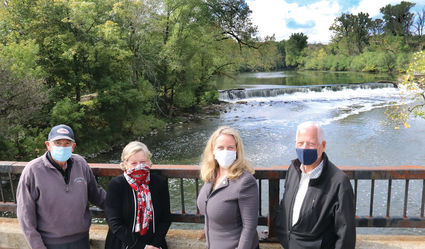 A plan to remove the dam in Salt Creek near the historic Graue Mill has been making waves in the community, with proponents touting the cleaner water that would result and opponents arguing the historic dam contributes significantly to the picturesque site in Oak Brook just beyond Hinsdale.

In response to an Illinois Environmental Protection Agency finding that Salt Creek at Fullersburg Woods did not meet state water quality standards for dissolved oxygen or for fish and aquatic insect biodiversity, the DuPage County Forest Preserve District commissioned a study. The DuPage River Salt Creek Workgroup, in its subsequent master plan, stated that "these issues are directly associated with the presence of the dam, as the lowest DO levels on Salt Creek were found in the impoundment area and a large decrease in fish and insect biodiversity were found upstream of the dam."

To remedy this, the workgroup said the forest district should "create over one mile of stream restoration and fish passage on 17 miles of Salt Creek by removing the existing dam and replacing it with a rock riffle."

But opponents say eliminating the dam would eliminate a treasured local landmark. Don Fuller, president of the Fullersburg Historic Foundation, said there's actually been a dam at that location since 1837, when a sawmill operated the banks. The current concrete dam was built in 1934 by the Civilian Conservation Corps.

"It's really historical in nature. It really puts a huge amount of history in perspective when you walk around the mill," Fuller said of the dam.

The waterfall created by the dam is what draws many people to the site, he said.

"It's a really popular thing, and we just felt that it was really worth saving," Fuller remarked, adding that installing aeration pumps is a possible alternative solution.

Supporters have collected nearly 14,000 signatures on a petition to preserve the dam, he said, and, along with members of the Graue Mill Board, have lobbied forest district commissioners for their cause.

Commissioner Linda Painter (Dist. 3), for one, said she is not convinced removing the dam is the answer. "This dam has a lot of history with the people near Hinsdale and Oak Brook and some of the other surrounding suburbs. Many of us grew up near the dam and it has a lot of nostalgia," Painter said.

She raised the issue of elevated phosphorus levels in the creek that were attributed to wastewater treatment plants, who in turn place the blame on the dam.

"To me, I haven't been shown that taking out the dam is going to help with the phosphorus levels," she said. "But I'm still doing my research."

Among the benefits advanced by dam removal proponents are increased access to creek recreation and education opportunities and lower costs for taxpayers because it would obviate need for expensive water treatment plant upgrades.

"Analysis shows that improvements to water quality due to dam removal are more effective and cheaper than plant upgrades. Plan upgrades have been estimated at $213 million in capital costs and $8 million a year in increased running costs," the group states.

Fuller said the fish population doesn't seem to be suffering.

"Fishing is actually very good below the dam, and you get about three quarters of a mile upstream from the dam and everything is really good," he said.

Painter said dredging the creek above the dam and engineering a so-called drawdown to lower the creek's surface are other projects that should be explored.

"They have complete control to not let any water go over that dam, and it can all go through that draw down and you could end up with the same solution and not have to take down the dam," she said.

But Painter and Fuller both signaled that the majority of forest district commissioners support the plan to remove the dam, which is expected to get a vote of approval at the commission's Oct. 6 meeting.

"I think they're close-minded. We're trying really hard to keep the dam and they're ignoring the will of the people," Fuller said. "We feel that there was so much history involved that we should really ask them to consider the historical aspects of this thing before they decide to take it out."