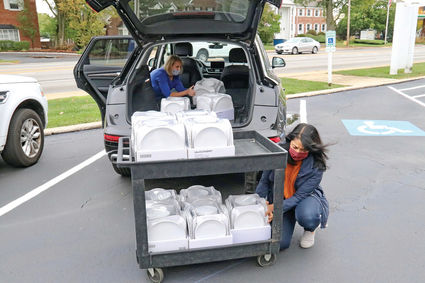 They've had to rethink everything from how to distribute coats to schoolchildren to how to hold their annual Books and Brunch fundraiser. They've also been working to meet the increased need that exists with many out of work and a backlog of individuals who were unable to receive services when the pandemic first hit in March.

"Things are picking up and people are moving into their independent living and it really came alive in the last two months," Cooper said. "We were actually sort of put in a situation to help in ways that were different from how our normal programs worked."

One of the earliest projects was creating emergency kits for homeless individuals who were put up in hotel rooms after the shelter-in-place order was issued in March. The kits included crock pots and disposable products that would allow people to fix meals in their rooms.

"It was an extreme rapid response," Monica Heidkamp of Clarendon Hills said.

Members weren't sure at first they would be able to find all the necessary items for the kits. Bijal Doshi of Burr Ridge headed to the Kohl's at 75th Street and Lemont Road.

"Literally I walked in and took every single slow cooker they had," she said. She learned from employees the store was closing the next day.

"We got in in the nick of time to buy the crock pots," she said.

Finding supplies - which has been difficult for everyone - has been an ongoing challenge for members.

"We source five different Walmarts and now we've found Dollar Tree is our friend, too," Beth Waldo of Hinsdale said.

Some of those supplies were used to assemble 400 toiletry kits for families served by the HCS Family Services food pantry and summer school supply kits for kids at Anne M. Jeans School.

"Now as we are moving into fall, it's still a new normal and it turns out everything has to be rethought," Cooper said. "Everything you've done for years, you have to think, 'How do I do it now? How do I so the same thing with new restrictions?' "

Permission slips for the Operation School Bell fall coat distribution has moved online and members are serving as personal shoppers for middle school students who can't participate in the annual shopping days.

Now members are preparing for their annual fundraiser. Books and Brunch Evening Edition, like many fundraisers, will be offered in a virtual version this year.

"We thought about canceling the whole thing and we thought, 'No, there is too much need and the need is greater in the community'," said Janet Roxworthy, who is co-chairing the event with Vicki Knowles. 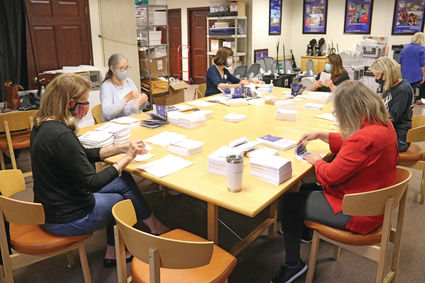 Because the fundraiser is focused on authors each year - rather than dinner and dancing - the event should work well online, Cooper said. A local author featured two years ago has agreed to interview this year's featured writers, Gloria Chao, Chris Jones and Sonali Dev.

"It might even be more interesting watching the authors because they are going to be interviewed by Andrea Thome," Roxworthy said.

She and Cooper both noted that Dick Johnson, who passed away in June, had served as moderator of Books and Brunch for more than a decade.

"Those are such big shoes to fill," Roxworthy said, adding that she's confident in Thome.

"We have no fear she will rise to the occasion and be a great host and interviewer for us," she said.

ALCW will continue to work to serve the community however it can, Cooper said.

"Even as it's more complicated and harder to do, we're still trying to grow," she said.