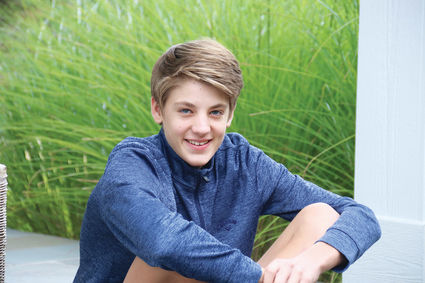 Anton Riegger loves just about everything about being outdoors. Everything, that is, except for the plastic waste that litters the forests, lakes and oceans that he so loves to explore.

A few months ago, Riegger decided to get behind a movement to decrease the amount of plastic waste in the environment by taking a pledge to reduce his own use of plastic and encouraging others to do the same.

As youth ambassador, Anton joins in on virtual meetings with other team members. Together they brainstorm ideas for how their organization can help people cut down on their use of plastic products.

Started in Florida, No Plastic Drinks is just getting started in its quest to help the environment by reducing the plastic bottles, cups, lids and straws that are used and discarded, often improperly.

"It's swimming in the oceans with the fish," Anton said. He learned that one trash truck full of plastic is dumped in the earth's oceans every minute of every day.

"That's a lot of garbage trucks," he said.

In addition to the world's water, plastic also makes its way into our food supply. Bits of degrading plastic have even been found in all sorts of foods, including fruits and vegetables.

Plastic comes in all sorts of forms and in all kinds of products, but Anton said a huge amount of waste could be eliminated if people simply used reusable metal water bottles. That was one of the first steps he took in reducing his own plastic use.

"It takes more than 500 years for a plastic bag or a plastic water bottle to decay," Anton said. But a metal bottle can be used countless times without adding waste, and a single water pitcher filter can replace up to 1,800 single-use plastic bottles. Anton said these are simple steps that everyone can take.

The entire Riegger family is behind the movement, Anton said. Mom Barbara also serves as a volunteer with No Plastic Drinks, and the whole Riegger household uses reusable beeswax wraps instead of baggies and plastic wrap and takes reusable bags to the grocery store.

Anton said he had hoped to engage his school and his classmates in his quest to reduce plastic waste, but with classes going virtual, the opportunity waned. Virtual school, however, has had the unintended benefit of reducing his own use of plastic, and likely that of others. Because Anton isn't packing a lunch each day, he's virtually eliminated his use of plastic packaging.

Anton said he's concerned about all kinds of pollution. Plastic pollution is one that he believes he can do something about, one reusable bag and bottle at a time.