Red Devil athletes are back in action

But COVID-19 has changed much about how the fall season looks, including no football 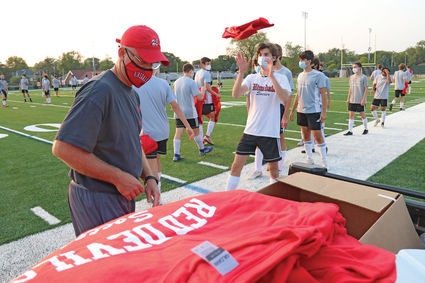 Sports are back! That's the good news for Red Devil Nation.

But the fall season, during which only six teams are competing, is presenting some unique challenges for everyone from athletes to the athletic director.

Dealing with ongoing changes to the fall schedule has been nerve-wracking, Hinsdale Central AD Dan Jones said this week.

In addition to designating opponents and playing locations, officials must be assigned to the games and buses must be ordered for away teams. In May, when the fall schedule typically would be finalized, no one knew if there would be a fall season at all. The Illinois High School Association didn't announce its modified plan for athletics until the end of July.

"We had to redo the schedules at the last minute and because we're depending on a lot outside venues - like park districts, forest preserve districts and golf courses - it changes, it seems like, daily on availability and them sometimes bumping you for someone else or another group," Jones said. "It's been frustrating. We've had a few hiccups and that's probably one of the things that drives me nuts is the hiccups."

While the schedule has undergone major changes on a macro level, for members of the girls swimming and diving team, the way individual meets are scheduled has changed as well.

"The state is not allowing us to run relays, which brings us down to nine events, and we can't run multiple levels in the same location at the same time," he said.

Diving competitions must take place at a different time as well. That means meets now include eight events and last about 45 minutes, he said.

"The state has allowed for more than two individual races per athlete, but the amount of time they'll have for rest in between races may not be enough to perform at a good level," Barber said. "Of the fall sports, we're the only one that is not running a full event lineup."

The preseason looked different for athletes this year as well. The girls cross country team wasn't able to hold its official camp until the last three weeks of summer, coach Mark McCabe said. Other issues complicated the team's preparation as well.

The football team, whose season has been pushed to spring, held its summer camp for 2 1/2 weeks at the end of July and beginning of August. The team is currently lifting and practicing once a week, head coach Brian Griffin said.

Players typically spend significant time from January to June in the weight room. When schools closed mid-March, that interrupted the off-season. And with the team scheduled to play in the spring, preparation for the 2021 season will be affected as well.

"This year if our season is in February, March and April, we won't be able to do the lifting for the underclassmen this spring that we normally would be able to do," Griffin said. "Those kids need to have an off-season, too."

Holding pre-season practices in February instead of August will be quite a change as well.

"Practices get shorter as the season goes on," Griffin said. "Those long practices are going to be in February when it's dark and it's cold."

He praised the players for doing a great job of wearing their masks under their helmets and said he tries to keep his focus on the present.

"I have a really hard time at this point planning beyond a couple of weeks because I don't expect anything to stay the same," he said. "I haven't really looked beyond the end of September."

The IHSA announced changes last week, although they won't affect the football team. Winter, spring and summer sports are no longer restricted to two contests a week and the summer will start two weeks earlier. Just yesterday Central learned a second round of postseason play will be added this fall for boys and girls golf and boys and girls cross country.

Jones said he joins parents and athletes in being grateful that some teams are able to compete this fall, even if they won't be able to participate in playoffs or state tournaments. But he thinks a lot about the teams that have yet to play.

"I'm worried about some winter sports maybe not getting the go ahead to go, then they are going to bump them to spring and summer," Jones said. "That is going to put a lot of pressure on our facility schedule and our practice schedule. That kind of keeps me up at night."

Griffin praised all involved for coping with new rules and frequent changes.

"I feel like everybody has worked really hard to make it all work," he said. "I appreciate the effort on the part of the kids and the parents and the school just to make it work. None of it is easy and none of it just happens."

McCabe said he just tries to keep it all in perspective.

"For a long time it looked like we might not have any season at all," he said. "We're great believers in looking at the glass being half full, because it could have been nothing, and now we've got a season that at least gives us a chance to get in some competitions and puts us in a place to really be ready in the future when hopefully things are back to normal and it's business as usual."

Whenever that will be.