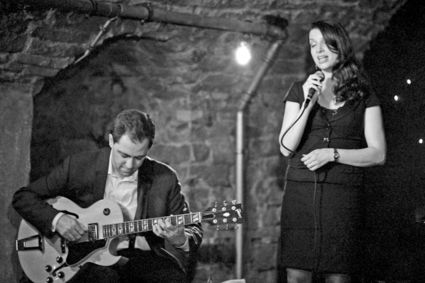 Jazz vocalist Petra van Nuis and guitarist husband Andy Brown will perform a livestreamed concert Monday starting at 7 p.m. presented by the Clarendon Hills Public Library. Van Nuis said the medium is a nice tool while in-person shows are not possible. "We all look forward to a time when we can play again for real." (photo provided)

Live concert venues may be silent these days, but that won't stop the music. Several local organizations are sponsoring online concerts for those longing to hear real-time tunes.

Union Church of Hinsdale is inviting people to alleviate their COVID-19 stress with "Songs from the Heart" from 7 to 7:30 tonight, Sept. 24. Director of Music and Worship Stephen Edwards and church organist Stephen Uhl will be joined by Gina Graffagna for the program, which will feature Mozart's Sonata in F Major, Carnelia's "Flight," Stephen Schwartz' "The Spark of Creation" and "Beautiful City" from "Godspell" along with pieces by Ralph Vaughan Williams, Strauss and John Bucchino.

"Music is such an integral part in the lives of our church members," Edwards said. "We are doing these concerts as a means of spreading joy in a time of need. With so many people at home and in isolation, these concerts provide a way to connect to the lives and spirits of those who don't have the opportunity to experience music or connection."

The performance can be accessed on the church's YouTube channel at https://www.youtube.com/channel/UC7gt8-bV5HSEw44dZMKhwEA. The program, according to Edwards, is designed to promote inner and outer harmony.

"The positive and heartfelt messages from 'Songs from the Heart' will hopefully provide a sense of joy, a sense of hope, a sense of connection, and a sense of peace during these crazy times," he said.

Petra van Nuis and Andy Brown will entertain at-home listeners with a evening of live jazz at 7 p.m. Monday, Sept. 28, in a concert presented by the Clarendon Hills Public Library,

Nicknamed "Chicago's First Couple of Jazz," the married duo has been performing since 2003. Vocalist van Nuis said library concerts have long been part of her repertoire, and those connections enabled her to pivot easily following the shelter-in-place order in March.

"When this pandemic hit, libraries were among the first places that the contacted me," she said.

Seeing the opportunities for virtual shows, her husband leveraged his technical acumen to transform their basement into a makeshift studio.

"We did our first concert from there in mid-April," she said.

By May and June, the pair were putting on several library shows a week.

"It wasn't our normal schedule but it was enough that we had something to do. We had a lot of work when no musicians were working," van Nuis said. "That (studio) has kind of been a golden goose for us during this time."

They also produced their own weekly livestreams for fans to enjoy and delighted at the expanded reach the format afforded.

"We were playing for people that we would have never played for under normal circumstances," van Nuis aid.

Using a chat function has added a new dynamic, as well.

"That has been funny. Normally you don't hear anything to the end. After every tune, you kind of lean in and read what people are thinking," she said, noting they're also able to take requests that way. "It's almost like being in a party."

"We want to play cheerful songs about hope and staying positive," she said.

The concerts not only have helped sustain their musical career but have uplifted those on the other end, van Nuis has discovered.

"Our performances have really helped some of them through the pandemic and given them a way to connect. I think for them it's been a real lifeline," she said.

The concert is free but people must register to receive the private YouTube link. Call (630) 323-8188 or visit https://www.clarendonhillslibrary.org.

• The longstanding Acoustic Renaissance Series of folk artists at the Unitarian Church of Hinsdale has gone online with the Michael Smith Tribute featuring Anne Hills and Jamie O'Reilly with friends from 7:15 to 9 p.m. Saturday, Sept. 26.

The performance is being held in collaboration with WFMT Folkstage.

And then at 7:30 p.m. Friday, Oct. 9, The U.S. Air Force Band of Mid-America will show the esprit de corps within the military with a streamed performance.

The livestream performances are available both on the MAC's website at https://www.atthmac.org and on its Facebook Live site. There is no fee, but freewill donations are appreciated to help ensure the MAC is equipped to host live shows again once they resume.