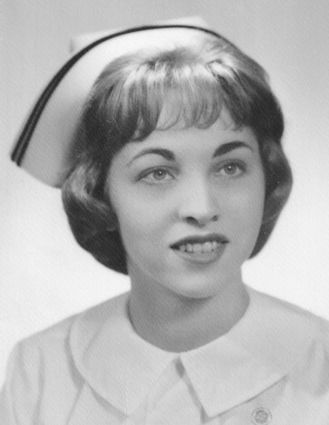 Midge was grateful for her family, friends and the many other blessings in her life, with her grandchildren as the icing on the cake of life for her. She was a longtime member of the Garden Club of Hinsdale, where she served for a time as its president. She enjoyed tending to her flowers and plants and sharing her horticultural knowledge with others.

Midge was an avid bridge player and enjoyed traveling, with a special affinity for cruises with friends and family as well as trips to Disney World with her husband, children and grandchildren. Midge and husband Tom were long-time parishioners and benefactors of St. Isaac Jogues Parish.

Midge was born in 1940 in Chicago, the only child of Arthur and Margaret Grandpre. Growing up she developed a special and lifelong relationship with her aunt, Mary Jane Grimes, and Mary Jane's nine children. She attended Resurrection Grade School and Siena High School in Chicago and upon graduation pursued a career in nursing, ultimately becoming certified as a registered nurse. Her friendships from her training at St. Frances Hospital were special to her, and she and her classmates remained in close contact over the years.

Early in her career, she assisted with the start-up of the first intensive care unit at the University of Illinois Chicago Hospital and later was named head nurse for the unit.

Her sports-crazed grandsons were impressed with the fact that she was one of the first nurses who traveled around the country performing drug testing of college athletes and that she enjoyed watching and following their favorite college and pro sports teams. Her love and aptitude for nursing and a desire to help other people are traits that she carried throughout her lifetime, impacting friends, families, and strangers alike. She went on to hold a number of nursing positions in the Chicago area over the years, both full-time and later part-time after she began raising a family. Tom and Midge initially settled in Oak Park where they were active members of St. Giles Parish before moving to Hinsdale in 1973 to continue raising their four children.

A memorial Mass will be said at 10 a.m. Friday, Sept. 25, at St. Isaac Jogues Church, 306 W. Fourth St., Hinsdale. The Mass will also be live-streamed. Those wishing to attend should call Sullivan Funeral Home at (630) 323-0275. In the absence of a memorial service, people;e are asked to share their favorite memories, photos and stories of Midge on her Tribute Wall at https://www.sullivanfamilyfuneralhomes.com.