Teens paddle through the pandemic 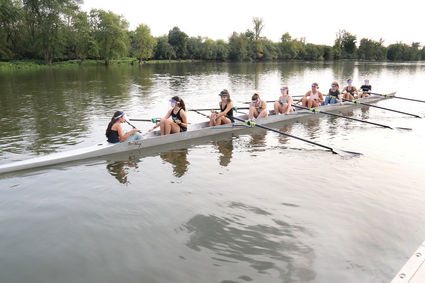 These eight rowers and one coxswain, all Hinsdale Central students, prepare to set out for their Chicago Rowing Foundation practice runs Monday afternoon on the DesPlaines River in Burr Ridge while Central's Christian Thompson and Alex Fuchs work on their two-man boating skills. Coach Emily Caflisch said the youth have committed themselves to the program, which draws from several high schools. "You get out of it what you put into it," she said. (Jim Slonoff photos)

A river is tailor-made for social distancing.

There's little traffic on the DesPlaines River on a lovely Monday afternoon as cormorants guard their nests in the bare treetops overhead. Fish flap out of the water while sunning turtles tumble in. Hustle and bustle feel a world away. This isn't suburbia. But yet it is, just a short drive from Hinsdale down Madison Street through Willowbrook and Burr Ridge.

Soon high schoolers from Hinsdale Central break the calm, arriving at the nondescript trucking lot along the river where the Chicago Rowing Foundation is able to stage its West program. The youth make the trip almost daily to take to the waterway in 56-foot-long, eight-person shells.

CRF shut down its activities along with everyone else back in March but recently started up again, aiming to educate teens in this unique sport while exposing them to a completely different side of the area's habitat. Several dozen from Central and other area schools get their assignments from coach Emily Caflisch and assistant Finn Conlon.

"It's actually some of the best rowing water ever. Super-wide, you can put like four boats across," Hildreth said, shortly before working with her peers to carry the unwieldy boat down the steps to the dock.

Rowers must all wear masks on land and have to certify they have no COVID-19 symptoms. Once in the boat, they switch to face shields for better respiration. Even though water CRF activities just resumed, Hildreth said that didn't discourage most of her teammates.

"We're all really close, and even if we didn't have in-person practice, I knew we would stay in touch," she said. "We ended up having practice every day on Zoom or FaceTime."

Many of those sessions involved fitness circuits, with stamina being an important aspect of rowing. Hildreth said a friend got her involved as a freshman and now she's become the advocate.

"I've recruited a lot of people here who are now on varsity," Hildreth said.

Caflisch came aboard last month to take over the program as it emerges from the pandemic. Now in her 10th year of coaching, Caflisch said there's a lot to be excited about in terms of program growth.

"I think that we are in a really great space to introduce a lot of youth to the sport," Caflisch said. "I think we're just scratching the surface right now of what this location could bring in."

While the majority of participants have been rowing for the past year, the shortage of available sporting opportunities now has helped steer some to the river, she noted.

"We absolutely have a contingent of athletes who are here because we are full go and we're an option," Caflisch said. "We are exceptionally lucky that we are about as close to full-go as we possible could be."

Central senior William Cho started with CRF as sophomore after moving from Dallas. Soon after classes ended in June he was also able to row with the mostly adult Hinsdale Community Rowing (HCR) club, which shares the launch, boat house and other resources with CRF, and restarted its rowing program earlier under state guidelines.

"When we joined HCR, we'd go out like every morning. So getting back in the water every day, seeing our teammates in person was a lot better," Cho said of the camaraderie at the heart of team rowing.

Hinsdale's Steve Louis, who helped found HCR, said kids and families were disheartened when the season was canceled in the spring. Caflisch's appointment as the new coach, however, transformed the mood.

"When Emily was announced as the new coach, it was as if a billion-pound weight lifted off of their shoulders and their heads," Louis said, noting parents were just as ebullient as their children.

Trying to keep gregarious teens to properly distance when they're mingling on shore can be difficult, Caflisch admitted.

But once in the water with a sweep oar in their hands, their focus sharpens.

"I love that they can come here and sort of check out from the reality that we live in right now," she said.

Safety is important, Louis underscored, for the youth to continue nourishing their bodies, souls and social lives.

"As long as they can follow (the protocols), they've got this opportunity which is unbelievable for them," he said.

Caflisch said she feels as much a beneficiary as anyone.

"It's really rewarding to provide an opportunity for these kids to get out of the house and have some sense of normalcy," she said. "It's such a unique, fantastic sport. It never gets old to watch someone do something they never thought they could.

"Whether they realize it or not, this is refueling their batteries," Caflisch added. "They come out here and this gives them life and this is very powerful for them." 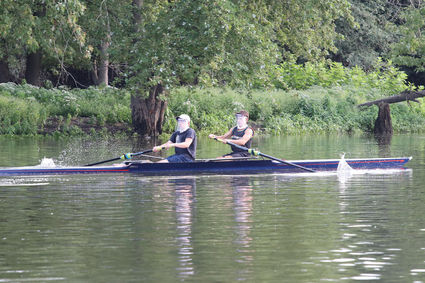