Project deemed too dense for village 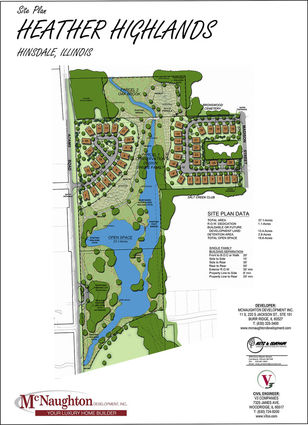 Hinsdale Plan Commissioners did not approve of McNaughton's plan to build 46 single-family homes on 37 acres between Madison and Adams streets.

The proposed Heather Highlands residential project has received low marks from both Hinsdale plan commissioners and residents of the Fullersburg community near the 37-acre site north of Ogden Avenue, who contend the density envisioned is not suitable for an area distinguished for its natural attributes.

At a virtual public hearing Sept. 9, McNaughton Development presented its request for a planned development of 46 single-family homes on the largely undeveloped parcel within a flood plain between Madison and Adams streets. Half of the homes would be built on 45'x70' lots and the other half on smaller cluster lots, with estimated price range from $900,000 to $1.2 million.

To build that number of homes, McNaughton requested a change of the property's zoning classification from R-2 to R-4. McNaughton team member Kon Savoy of Savoy Consulting Group said Heather Highlands would help preserve and promote the natural features of the site by keeping nearly 20 acres as open space, clustering a portion of units and providing publicly accessible pathways around the property.

"The request for more units than are allowed in the R-2 will, we believe, not only will have a limited or insignificant impact on the neighborhood and villages, but also allows us to offer the village a unique and special opportunity to create one of the most attractive and arguably desirable open spaces and recreational areas in the village while providing an much needed park for the residents north of Ogden," Savoy said.

Representatives of the developer testified that the undeveloped portion of the site would be placed in a conservation trust for management and that the impact of the project on school enrollment, traffic congestion and stormwater issues would be minimal. Acknowledging strong resistance to the plan from area homeowners in the months since details emerged, project manager Paul McNaughton Jr. said he hoped the public hearing would clear up any misinformation.

"That's why we wanted to put our case before the plan commission tonight, so that the record is clear as to what exactly we're proposing so that people can formulate questions based on this presentation," McNaughton said.

What was clear was that residents' objections hadn't changed. During public comment, Fullersburg resident Dan Hemmer said opposition is so strong that a non-profit was formed to fight the project, which he said was being misrepresented by the developer.

"The nature of our community is not tract housing," Hemmer said. "It's a ridiculously dense plan that doesn't fit within our community."

"We are very opposed to cluster-type housing and heavier concentration of traffic and all the congestion that that would bring," Current said. "We see nothing positive that could come from this."

Commissioner Michelle Fisher questioned the developer's effort to market the homes to both young families and empty nesters.

"I just don't see grandma and grandpa moving to an area like that," Fisher said, suggesting, with others, that young families moving in could overburden Hinsdale schools.

Commission Chairman Steve Cashman noted the developer's request to change the zoning classification would more than double the 21 units that would be permitted there under existing regulations.

"This is not a little change in density - 46 versus 21 is not even close. I do have concerns about increased traffic, impact on the school district," he said.

Cashman said the developer's "public benefit" of open space was mostly space that could never be developed anyway because of the flood plain. And the prospect of permanently altering Fullersburg was the most unsettling factor.

"I think the biggest negative would be a complete change in character of the neighborhood," Cashman said of the community that straddles Hinsdale and Oak Brook. "The neighbors do not want this."

The plan commission is expected to issue its findings and final recommendation at its Oct. 14 meeting. The village board has the final say on whether the project is approved.