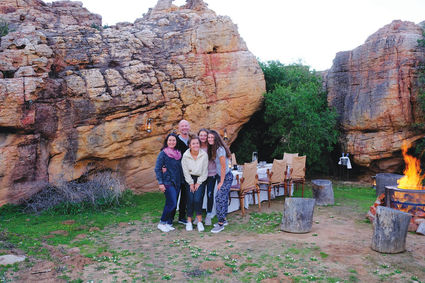 The Sanders family has done a fair amount of traveling, with annual visits to Jean's dad in Puerto Rico and Scott's family in Florida and a number of road trips.

But they had never experienced anything like the 10 days they spent last summer in South Africa.

The destination is offered in a rotation of incentive trips offered by Scott's company, Boston Scientific. He had never gone on that trip, but it piqued his interest.

"It always comes back by far as the best location," he said. "I put this on Jean's radar four years ago."

Scott, Jean, their kids - Joanie, Maggie and Sarah (17, 15 and 12 at the time) - and Jean's sister, Beth, and her son, Billy, spent 33 hours traveling to Cape Town International Airport, including an 11-hour layover in Qatar.

"It's brutal," Scott said of the trip, noting that he saved $5,000 in airline fares by flying to Qatar en route to Cape Town.

"With how much we loved it, I'd do it again in a heartbeat," Jean said.

The vacation included three destinations, the first of which was the Bushmans Kloof Nature Wilderness Reserve and Wellness Retreat in the foothills of the Cederberg Mountains. The group stayed in a house with a private chef who created some amazing meals, including lamb rib eye and shrimp curry. The reserve is malaria- and predator-free.

"This place is more about hiking because you're not going to get eaten by anything," Scott said.

After three nights of biking, kayaking and viewing cave art, the family headed to Cape Town, where a winter storm had just passed through. The bad weather forced the cancellation of some of their plans, including Scott's cage dive with great white sharks.

"I was kind of pretending it wasn't going to happen and it didn't happen, so that was good," Jean confessed.

They toured wine country, visited a beach inhabited by African penguins and left the kids at home for a five-course dinner at a wonderful restaurant. The meal was surprisingly affordable.

"Once you get to South Africa, travel and tourism is phenomenal and inexpensive because it's still a developing country," Jean said. "Things in this country we would pay a ton of money to do or eat or see there are really affordable."

The family was shaken a bit during their visit to Cape Point, where the Indian and Atlantic oceans meet. The spot also is home to many baboons.

"They are the only thing that can kill a lion. They're terrifying," Jean said.

Especially when one follows you into the bathroom, as happened to Jean and Maggie. They managed to leave without incident, but their nerves were rattled.

For the final leg of the trip, the group flew to the Thornybush Private Game Reserve, adjacent to Kruger National Park. The family divided up into four huts, with most housing two.

The outside bar and eating areas are beautiful, Jean said, but she was a little on edge after she saw where an elephant had broken through the perimeter fence and destroyed one of the bars.

"They give you an air horn and a flashlight. They said, 'If you need help, hit the horn,' " Scott recalled.

The highlight of their time there were the safaris to see what is known as the "Big Five" - African lion, African elephant, rhino, Cape buffalo and African leopard. The family got lucky on its first excursion.

"We saw the Big Five on our very first game drive," Scott said. "They tell you just stay in the Jeep. The Jeep is open air. If anything comes at you, you stay seated and you don't move."

The days typically began with coffee and pastry before the morning drive, followed by a big breakfast after. Midday hours from 10 to 3 were open for swimming, napping or visiting the watering hole, followed by lunch.

The afternoon drive, which started at 4 or 5 p.m., went until dark. At some point the guides would stop and set up a bar with drinks and snacks for a "sundowner." 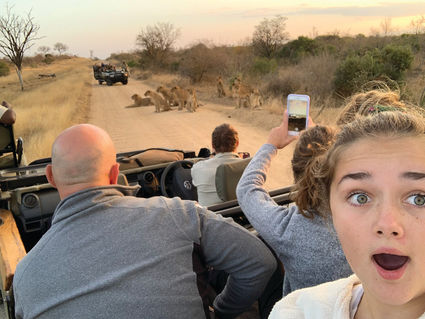 Sarah was a little surprised to see some of the wildlife on the family's safari through the Thornybush Private Game Reserve - including this pack of lionesses.

"You're doing your sundowners and looking at the bushes, wondering if something is going to jump out at you," Scott said.

Evenings were spent enjoying dinner and sitting around the bar telling stories.

"That's what the best part was about our experience, getting to know our particular guides," Jean said. "It was fun to get to know people from South Africa."

Jean also enjoyed photographing everything from her family members to the animals they saw on safari, coming home with about 4,000 pictures.

"I just knew it was a once-in-a-lifetime kind of trip," she said.

Each of the Sanders family members shared what they enjoyed most about their 10-day trip to South Africa in July 2019.

“Getting to know the locals and hearing their unique stories. A bonus was the food — and wine was awesome and reasonable!”

“It’s so hard to pick a favorite part, but I was so overwhelmed with our first stop in the western Cape. The reserve was so beautiful, there was so much to do, the food and wine were amazing and the people were so welcoming.”

“I loved the safari and seeing ‘The Big Five.’ The most memorable part was when we were charged by a very angry elephant on a night excursion.”

“My favorite part of the trip was seeing the different culture in South Africa, because it was my first time out of the country and it was so different from here.”