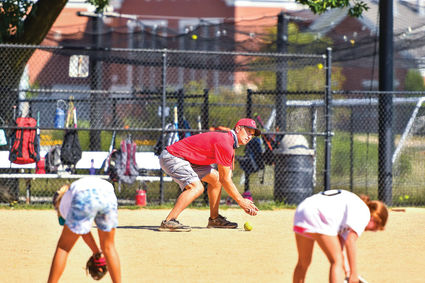 Junior Brook Bauer is one of the Hinsdale Central softball players who helped coach the clinic last week. Coach Steve Contreras works with girls at the Lady Red Devils Softball Training Academy Aug. 20 at Eccles Field in Prospect Park. Girls ages 8-13 can try out for the Lady Red Devil Softball Team from 2 to 5 p.m. Sunday, Aug. 30 at Eccles Field. Registration is required; visit https://www.clarendonhillsparkdistrict.org. (photos by Mike Prepelica for The Hinsdalean)

And she wasn't even really playing - she was running drills with the girls signed up for the Lady Red Devils Softball Training Academy. But it's the closest she's come to her sport for the past six months.

"This summer my season was canceled, so the last time I played a game would have been in February," said Harvey, who plays first base and outfield for Central and the Downers Grove Outlaws travel team. "It was hard. It stinks. Luckily I wasn't a senior, so my last season wasn't cut short and luckily I have this year to get it back."

She said it was awesome to be back on a field for the clinic, which ran Aug. 19-21. Plus she enjoys working with kids.

"Their energy is always through the roof and just to see them learn the details and the specifics of softball is really interesting," she said.

With participants ranging in age from 8 to 14, Harvey and the other girls helping out with the clinic have to adjust their approach.

"With the little girls we tend to do more games or basic throwing and hitting," she said. "It's fun to see the little girls try out softball and see how they learn, but with the older girls it's easier to run the camp because they know what they are doing and they get it more.

"Both are amazing," she added.

Grace Myall, a junior at Central who played on the JV team last year, played whiffle ball with her group on the first day of the clinic and then progressed to base running games. Like Harvey, she enjoyed working with the girls and having the chance to get back into softball.

"It felt really great," she said. "I hadn't really been able to practice softball over the summer. Just being able to be around girls who love the sport as much as I do, to be able to play it, was awesome."

Central junior Brooke Bauer, who plays shortstop and a little third base, noted how much the girls grow over the three-day clinic.

"I like watching them improve over such a short amount of time, and I think it's exciting to see them apply corrections and get excited when they do well," she said. "There are definitely some kids who are really passionate about it and work really hard, and they can immediately apply corrections and show such big improvement even by the end of one day.

Coach Steve Contreras said the girls who attend the clinic and then try out for the Lady Red Devils softball team typically are a little more serious than those who sign up to play in the Clarendon Hills Little League.

"For those that want to work harder and put in the extra time and compete against other towns and stronger competition, the Lady Devils program is more about players who stick with it and do aspire to play in high school," he said.

Interest in the sport is growing. Girls' enrollment in Little League has doubled three of the four years the program has been in existence. Fifty girls signed up for the first year and 300 were registered to play this year before COVID-19 canceled the season.

The girls teams - and the Lady Red Devils - are run through Clarendon Hills but are designed to attract girls from Hinsdale and other Central feeder towns, too.

"My whole premise is to give the girls the same opportunity the boys have," Contreras remarked.

He said he appreciates the opportunity to have high school players work at the clinic.

"I just hope they inspire the younger girls and I hope they take from it just that love of the game and they keep working," he said. 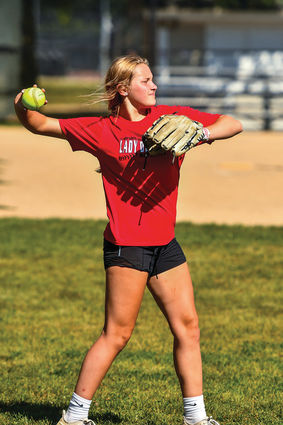 Focusing too much on mechanics with 8- or 9-year-olds is counterproductive, Contreras related, noting that knowledge of the game and work ethic develops with time.

"If they don't have the love of the game, they are never going to get there," he said.

Bauer, who has been playing T-ball and softball since she was about 3 years old, agrees - even if players plan on competing in high school or beyond.

"I would say my advice would be to not take the game too seriously and have fun with it, because at the end of the day, it is just a game and it shouldn't determine your entire self-worth and confidence," she said. "It should be all about having fun and doing the best that you can."