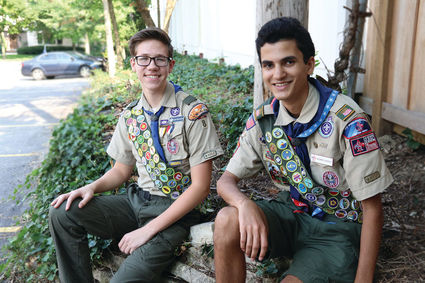 Boy Scouts Aldas Kriauciunas (left) and Sacheen Upadhye of Hinsdale Troop 8 were honored earlier this month with the Hornaday Badge Award. The honor is given to Eagle Scouts who complete a conservation-related project and can verify its lasting impact over time. (Jim Slonoff photo)

The rank of Eagle Scout is well-known both inside and beyond the Boy Scouting World. But few are aware of Scouting's Hornaday Badge Award.

Members of Hinsdale Boy Scout Troop 8 are certainly familiar with Hornaday after two members, Hinsdale residents Aldas Kriauciunas and Sacheen Upadhye, achieved the rare honor this summer by dedicating significant time and effort into what they hope are lasting contributions in the area of conservation. Fewer than a 100 Scouts nationwide earn the award every year.

To be eligible for the award, a Scout must earn First Class rank, complete requirements for several selected merit badges and plan, lead and carry out a project promoting the environment. Sacheen's father, assistant Scoutmaster Shashank Upadhye, alerted the two to the Hornaday badge knowing that they already satisfied many of the criteria.

For Sacheen, a junior at Hinsdale Central High School, his vision to build artificial reef habitats for bluegill fish in Maple Lake in Willow Springs grew out of his interest in reef structures observed as an avid scuba diver.

"I started looking for lakes or rivers here where I could implement them," he related.

Studying Cook County's fish stocking reports, he discovered that bluegill - Illinois' state fish - needs regular intervention to maintain its population. He reached out to the Cook County Forest Preserve District about building reef structures and they liked the idea. Officials there even gave him the material to use: salvaged fishing line.

"They want to recycle it, so they took those long filament lines and pressed them down into beams and slats, and they donated thousands to me," Sacheen said. "So I used them to make my fish habitats. They're very sturdy but they're also flexible, too."

Six months of research yielded five different designs from which he constructed six reef structures over a month's period, with the help of volunteer troop members. Staples and zip ties were used to fasten them since materials that corrode, like nails, were not permitted. He and forest district staff last summer sunk them into the lake at locations believed to be most beneficial for the fish.

"That was the ending of my Eagle project," he said. "I still had to do the Hornaday portion, so that's why I didn't complete it for another year because I had to go back and keep checking on the reefs and making sure they were working."

He also made a brochure about his project and bluegill ecology to educate others.

Trying to evaluate population levels is difficult in the murky lake, Sacheen admitted, but the structures looked to still be standing this summer, and anecdotal feedback from local fisherman indicated the bluegill were thriving.

"I hope that they're working," he quipped.

While Sacheen promoted conservation below the water line, Kriauciunas, a senior at St. Ignatius College Prep, looked skyward. Considering his Eagle Scout project, Kriauciunas recalled seeing a bat hanging from a bench at a summer camp he attends in Michigan. He subsequently learned that sprawling camp had only one bat house, which was woefully inadequate. The creatures needed better digs.

"Initially I built a prototype after looking at a variety of bat houses that were said to be successful," he said.

He consulted with naturalists at Fullersburg Woods and Willowbrook Wildlife Center to perfect the design, then enlisted Troop 8 members to assist in constructing seven houses.

"I installed them in July of 2017. And then I went back to camp in 2018, and they weren't inhabited, but it usually takes about two years," he explained. "In July of 2019, I looked and some of the bat houses were actually populated with bats."

Unfortunately, bat houses also attract woodpeckers. So Kriauciunas came up with a solution.

"We put metal plates over them," he said. "I gave a little speech to Troop 8 about my bat house and how I fixed it."

Shashank Upadhye characterized the Hornaday Badge Award as "almost like the Eagle Scout on steroids," particularly the provision that projects must be followed up to ensure their ongoing efficacy.

"You've got to go back and validate what you did," he said.

Sacheen said the commitment was considerable.

"I put 100 hours in this project and it was a lot of work, especially trying to balance it with school and extracurriculars," he said.

Kriauciunas agreed. And he took satisfaction in knowing the effort is having an impact, unlike Eagle Scout projects that may simply be short-term improvements.

"It took a lot of work and a large number of hours to actually complete the project," Kriauciunas said. "I'm happy to see that bats are actually inhabiting the houses."

The two are both longtime scouts as evidenced by the scores of merit badges filling their sashes, and both served as volunteers on each others' projects. They both are glad they walked this extra length on their Scouting paths to protect small but essential creatures of the animal kingdom.

"I know that I dedicated my time to something useful," Sacheen said.