Hole in one is the icing on top of DiTrani's PGA Jr. League Championship tour in 2017 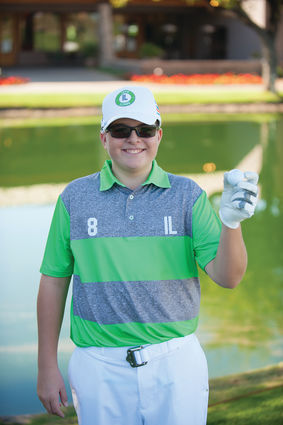 Hinsdale's Jack DiTrani shows off the ball he used to sink a hole-in-one at the 2017 PGA Jr. League Championship at Grayhawk Golf Club in Scottsdale, Ariz. DiTrani, 16, said being part of Team Illinois at age 13 was just as meaningful for him as the stellar shot. (photo by Traci Edwards/PGA of America)

Jack DiTrani clutched his 52-degree gap wedge on the tee of the 97-yard hole, took aim and launched his TaylorMade ball. The trajectory was a little thinner than planned, but the line was good. Very good.

"I didn't hit it exactly how I like it," DiTrani said. "It was going really fast and it hit the pin and dropped in. I jumped up and down and threw my arms in the air, and everyone was excited and happy."

By everyone he meant his playing partners, fellow Team Illinois members who had traveled to Grayhawk Golf Club in Scottsdale, Ariz. for the 2017 PGA Jr. League National Championship. His hole-in-one came during a practice round before the start of the tournament, so there was no gallery to erupt in celebration.

But a couple of tournament officials were on hand to witness it.

The then-13-year-old Hinsdale resident was competing in his first national team event. The 10-strong Team Illinois based at Cog Hill Golf & Country Club in Lemont had earned its spot by winning both the state and Midwest region competitions.

"It was amazing," DiTrani said of qualifying for nationals. "It was such a great feeling because we had worked hard, and we were just super-excited and really happy about getting there."

Held in November every year, the PGA Jr. League Championship is for golfers age 14 and younger, and brings together the top teams from each of the country's eight regions. DiTrani recalled the opening night cookout where he met a number of his counterparts from across the U.S.

"It was fun to see all the talent out there. You don't realize how much talent there is and it really opens your eyes to that," he said.

DiTrani, whose family accompanied him, had never been to Grayhawk before, so the practice round was vital for gathering intelligence - and confidence. As for scoring aces, that was a box he had already checked. It had happened just a few months earlier, in fact, at his home course.

"It was in July of 2017 at Cog Hill during a summer junior league match," he related. "We were on Course 1, hole 4. I actually hit (my tee shot) really good. I landed it a foot or two front in front of the pin and it rolled in."

Needless to say, DiTrani was feeling pretty good about his game upon arriving in Scottsdale that November. He was especially excited to take on an Arizona track, complete with towering cacti.

"It was a super nice course and it was in great shape," he said of Grayhawk. "The air was sure different than here, and the ball was flying a lot further in the air. Once we got used to that it was really nice."

It was Nov. 17, late in the practice round, when he stepped up to the 16th hole,

"I think it was the shortest hole that we played," DiTrani commented.

He made it even shorter. Just like that, two holes-in-one in the span of four months. Impressive.

DiTrani said he was impressed with the team's VIP-like reception at the tournament: shuttle service, greens and the practice range roped off for players only just as at a pro tournament and a private team room complete with video game system.

"It felt really cool to be treated like you're a pro almost," he said.

A camera crew was even on site for the Golf Channel, and DiTrani was invited to do an interview with his coach, Kevin Weeks - in 10 minutes.

"I said, 'Sure I'll do it.' When we were preparing for it, I was told, 'It's live, so don't say anything you don't want to be heard.' That was nerve-wracking," he related. Team Illinois didn't come home with a trophy but collected a trove of memories.

"We didn't play our best golf but we all really enjoyed being there," he said.

DiTrani hasn't stopped recording holes-in-one. Now 16 and a junior at Benet Academy, he notched his third last August during practice with his Benet golf teammates at River Bend Golf Course in Lisle (hole 5, for those interested).

"This was a little longer than the others, almost 130 yards," he said. "That one I hit really well, too, but I couldn't see it go in because of a bunch of fescue in the way."

Looking back on his PGA Jr. League Championship journey, DiTrani thinks the camaraderie and commitment required to get there helped take his game to the next level.

"I loved the team. Being able to share all those experiences with my teammates and friends was really fun," said DiTrani, who sights are set on playing in college. "It also made me play better and made me love practice more and just golf in general."

His three hole-in-one souvenirs are in a jar in his room, and he also got a special keepsake from Grayhawk.

"They gave me a flag with the hole's number on it," he said. His name also adorns Grayhawk's restaurant wall.

If DiTrani has any regrets, it would be not hanging on to that gap wedge. 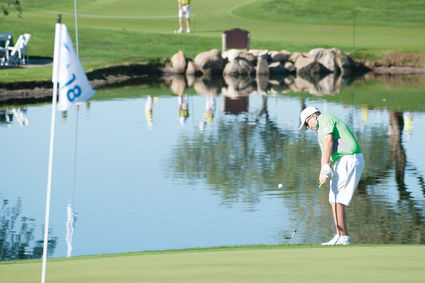 "I outgrew it. I didn't keep it. Looking back at it, I probably should have," he said.

At the rate he's going, space will soon be scarce for all those mementos.