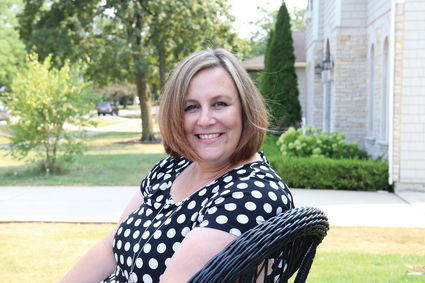 Hinsdale resident and Australia native Cherie Jackson not only promotes a vegetarian lifestyle through her job as CEO and co-owner of Frooze Balls, she lives it. She and husband Blair, vice president of finance and business development for Burr Ridge-based milkadamia, both work for plant-based food companies and raised all three of their children as vegetarians since birth. (Jim Slonoff photo)

Wander into any Trader Joe's store in the United States and you'll find a product with ties firmly rooted right here in Hinsdale. Alongside big-name brands like Cliff and Kind bars, shoppers will find a completely natural snack called Frooze Balls.

Hinsdale resident Cherie Jackson is CEO of Tino Kai LLC, U.S. distributor of Frooze Balls - the all-natural, plant-based snack born in New Zealand. Thanks in large part to Jackson's efforts over the last few years, Frooze Balls launched in Trader Joe's stores all over the country in June.

Frooze Balls, named after the product's fusion of fruit and nuts, have been available in New Zealand since 2008, Jackson said. That's where they were created by Jackson's former colleague turned vegan celebrity chef Jeremy Dixon.

"We've been friends for over 20 years now," said Jackson, who met Dixon while the two were marketing New Zealand's favorite brand of healthy breakfast cereal. After Dixon branched out to start his own vegetarian cafe, Frooze Balls were born.

The company's relationship to Hinsdale began 12 years ago, when the Jackson family made its way to the states via Australia, New Zealand and finally, Canada. When Frooze Balls became New Zealand's top healthy snack about five years ago, the time was right to introduce the product to health-conscious Americans. With Jackson's help, Frooze Balls became available to Hinsdaleans via Cafe La Fortuna, where the snacks are still sold today, as well as several other small markets that specialize in healthy foods.

The first U.S. shipments of Frooze Balls were packaged in the basement of Jackson's Hinsdale home. Now, products are shipped directly from New Zealand to Amazon warehouses and retail locations across the country. Today, along with major retailers Trader Joe's and TJ Maxx, U.S. consumers can find Frooze Balls on Amazon.

Frooze Balls are available in flavors ranging from fruity to chocolatey. While most are available online, two were created exclusively for Trader Joe's. Peanut Butter & Jelly and Chocolate Hazelnut are quickly becoming favorites not only among all Trader Joe's shoppers, but also in the Jackson household.

"The jelly is made from elderberry juice and strawberry puree," Jackson said.

Production of Frooze Balls has moved from Dixon's cafe to a larger, facility, but Jackson said the little kitchen where it all began is still part of the story. That's where Dixon and his team are hard at work developing new recipes and new flavors.

It's part of the company's ongoing commitment to creating products that are not only good for the consumer, but for the environment. To that end, Jackson said plans are in the works to bring production of Frooze Balls to Illinois.

"It's one more way we can reduce our carbon footprint," Jackson said.

Food and nutrition have always been important to Jackson, who has a degree in nutrition. Her first job was teaching vegetarian cooking.

"Our whole family is vegetarian," Jackson said. "My husband and three children have been from birth. The kids are all athletes. They really are 'poster children' for the benefits of a vegetarian diet."

A diet that, of course, includes plenty of Frooze Balls.