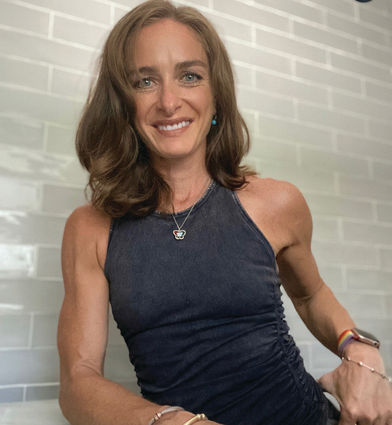 What are the key benefits of yoga?

A marathon runner who wasn't afraid of a tough workout, Rimmele acted on her coach's suggestion and signed up for a class at Core Power Yoga in Hinsdale 10 years ago.

"It was a whole new universe for me," said Rimmele, who in that first class discovered that while she could run 26 miles, she couldn't do a single push-up.

"I walked out loving and hating it at the same time," said Rimmele, who was both frustrated and motivated by the experience. It didn't take long for the motivation to take over. Six months after her first class, Rimmele was enrolled in the studio's training program, learning to teach the classes herself.

She's still on staff at Core Power Yoga, but Rimmele also has launched her own platform for sharing the benefits of yoga not only with local yogis, but with anyone who has an internet connection.

Rimmele said she had planned for years to take her yoga classes online, but it wasn't until this spring's quarantine kicked in that she finally put the plan into action. Starting with Facebook live, Rimmele said she attracted thousands to her virtual yoga classes.

"This is a norm that's not going to go away anytime soon," Rimmele said of the need to stay home and the impetus for her launch of Grit and Grace Yoga.

"We're all a lot more anxious," Rimmele said. Yoga helps people to control their breathing, free their minds and reduce their stress, all while toning their bodies, increasing flexibility and strengthening muscles.

Rimmele said in the 10 years since that first class, yoga has transformed her mind, her body and her life. It gave her a new career and new friends. Physically, yoga has given Rimmele what she calls "chaturanga arms" - the toned muscles that result from repeatedly performing the common yoga pose.

For those unsure of their yoga abilities, Rimmele often shares the story of her first push-up, reminding them that everyone, even marathon runners, have things that are hard for them. But with hard work and encouragement, those difficult things can become easy.