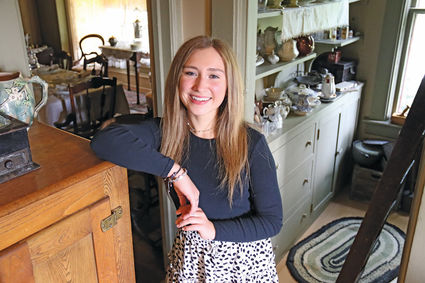 Exploring antiquity has been a passion for Hinsdale's Sarah Jane Nicholson since not long after her own timeline began.

Her American Girl dolls were more than just play props - they were portals into the past with their representations of colonial and pioneer-era Americans. World history was also a source of fascination.

"When I was probably in first or second grade I took a class at Northwestern University about ancient Egypt," Nicholson related.

The Hinsdale Central junior enjoys imagining life in bygone eras. Her family lineage traces back to the Revolutionary War, and she lives in an 110-year-old house that, while modernized, still breathes whispers of the past.

"I just think it's so cool that there were people living in this house over 100 years ago, and there were people my age that were growing up and were living a life completely different from mine," Nicholson said. "I like to learn about the different foods they ate and compare my life to theirs."

"It's really interesting to go there and be inside of a house that drops you into the middle of Hinsdale's history," Nicholson said, intrigued to learn, for example, that the museum's decorative sea shells were signs of status in the 19th century.

She is now spearheading formation of the historical society's newly formed Junior Board, recruiting other teens to join her (see Page 32 for details).

"I hope to create as many events as possible for younger children," she said, citing plans for an American Girl book club before COVID-19 hit. "I really want to focus on community engagement with younger children and educating them about the history of Hinsdale."

This summer, Nicholson was preparing to step back into the realms of ancient Rome and Greece through a National Geographic-sponsored tour. Unfortunately the trip was scuttled by the COVID-19 pandemic, but she's hoping to go next summer.

Thanks perhaps to a seed planted by that Northwestern class, Nicholson's envisions herself one day unearthing the mysteries of the pharaohs.

"It's my dream to pursue a degree in Egyptology, to study ancient Egypt and work with artifacts there as an Egyptologist," she said.

As for growing the Junior Board, Nicholson acknowledged that reveling in relics may not be everyone's idea of fun, especially in her social circles.

But she hopes the chance to give back to the community will be an enticement.

"We need to celebrate where we came from, how hard people worked and how far we've come."