Woman celebrates her century of living 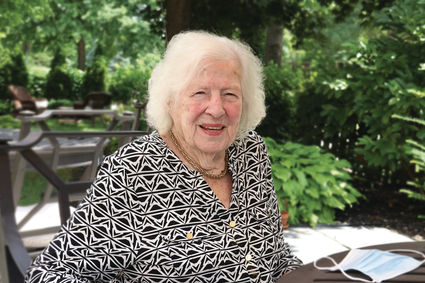 HELEN JOHNSON GREW UP ON CHICAGO'S SOUTH SIDE • MOTHER TO FIVE, WITH 16 grandchildren & 20 GREAT-grandchildren • CALLED 'NANNI' BY HER FAMILY • AVID BRIDGE PLAYER • MARRIED TO MEL FOR 71 YEARS

Hinsdale's Helen Johnson may be on the verge of turning 100, but don't rush her.

"I'm not there yet," quipped Johnson, who will reach the milestone Saturday.

For her, one's level of activity is a more accurate age barometer than the number of calendars burned through.

Johnson continues a pedigree of longevity in her family, with a mom who lived to be 99. And one of her longtime friends turned 100 on July 1.

"We were in a club of 11 gals, and Florence and I are the only two left," Johnson said.

Growing up on Chicago's south side near Ogden Park, Johnson attended grade school at St. Brendan's Church and Our Lady of Loretta High School. She was the baby of the family, preceded by two brothers and a sister. Entertainment was often self-invented.

"Just good times. (I had) no money, just fun," she said of her childhood memories. "Just going out and playing."

Johnson gravitated more to the boys' brand of adventure.

"We'd play hide and seek until 10 o'clock at night. The neighbors would put up with us until that time, and after that we had to quit," she related.

She met Melvin Johnson during her Sunday outing to the local dance hall. He asked her to dance and she thought he was cute. Before long World War II called, but their relationship endured his tours in he Pacific Theater and North Africa with the U.S. Army Air Corps.

They were married in 1946 at St. Brendan's and eventually put down roots in Chicago's Mt. Greenwood neighborhood, raising daughter Patti and sons Mike, Larry, Jerry and Bobby.

Johnson said the COVID-19 pandemic reminds her of the polio scare in the 1950s.

"It hit very bad in our section of Mt. Greenwood," she said.

Helen and Mel moved into Eve Assisted Living a few years ago to be close to their family in the suburbs. Mel passed away in February of 2018.

Her 16 grandkids are evenly balanced by gender, as are the first 16 great-grandchildren. A recent streak, however, give the girls the edge.

That's fitting, perhaps, as it was just a few weeks after Johnson was born, on Aug. 26, 1920, that the 19th Amendment to the U.S. Constitution was officially adopted giving women the right to vote. The month also introduced the country's first commercial radio station and the American Professional Football Conference, forbearer of the National Football League.

Told that an unsuspecting person would never guess that she was on the cusp of being a centenarian, Johnson retorted, "Gee, I hope not!" What's her secret?

"No secret. Just get up in the morning, go to bed at night," she remarked. And don't let fear win.