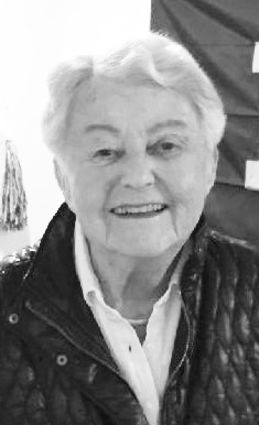 Mary Charlotte Herrington Whiteside, a former resident of Hinsdale, passed away unexpectedly on March 8, 2020, in Kirkland, Wash., due to complications of the COVID-19 virus pandemic.

Mary, 90, was born in 1929 in Bad Axe, Mich., to Phebe May Clark Herrington and Dr. Charles Irvine Herrington. Her father was a physician and her mother taught violin lessons, was a seamstress/dress designer, and personal assistant for the governor's wife, Mamie Sleeper, for whom Mary was named. At age 13, her mother passed away and she and her brother stayed a time with their "aunt" Mrs. Sleeper and Uncle Bert.

Mary played the flute and piccolo in high school, along with being a cheerleader, and participating in plays and the choir. After graduating Bad Axe High School in 1947, she attended the University of Michigan Nursing School. She then worked at Scripps Hospital in La Jolla as a surgical nurse. It was while she was there, in a house on the beach with two other Marys, that she met her future husband Nate, from Hinsdale, on a blind date. They were married on August 20, 1955, and settled in Hinsdale to raise their three children.

In 1972, the family moved to Northville, Mich., after buying Midwest Bank Note. Mary worked alongside her husband in various roles such as proofreading, certificate framing and secretarial work. She was involved in their children's schools.

Mary and Nate spent summers and winter weekends in Michigan at their cottages at Glen Lake and Port Austin. She and Nate moved to Glen Lake after Nate retired. She was involved with the garden club, Glen Lake Yacht Club, and crewed for Nate on their Snipe sailboat over the years, winning many races. They became snowbirds and Florida residents up until 2014 in Boca Grande and also visited Sanibel's Island Inn when they could. They enjoyed tennis, card games and all sorts of social activities, including sailing and creating the Boca Grande Yacht Club with their friends. Mary and Nate would also take a yearly ski trip out to Aspen and Vail Colorado with dear friends from Hinsdale, until they allowed their kids to start joining them.

Mary loved to bicycle places where she lived. She was a downhill and cross country skier, an occasional ice skater and loved sailing and driving her classic Century wooden boat. She enjoyed playing tennis and golf and was a shuffleboard champion. Her hobbies included interior decorating, playing card games, gardening, knitting, needlepoint, jigsaw puzzles and collecting shells.

Mary was a classy, sweet, friendly, smiley, fun-loving person who raised their children firmly but lovingly. She made friends easily and was known for her spirit and spunk, her laugh, her stubbornness, her love of family, her humor, her secret family brownies and her love of classical music including attending concerts in Ann Arbor. She was an avid University of Michigan and football fan, and always a sun worshiper for a suntan on the water or snow. She appreciated art history and attended many art museums around the country with friends and on tours. She loved to travel and visited Ireland, Scotland, England, Grenada, Germany, Austria, France, Belgium, Switzerland, Greece and Norway.

She was preceded in death by her husband, Nate; and her older brother, Dr. Charles Clark Herrington.

She is survived by her children, Martha (Paul Smith), Charlie (Laura) and Jim (Kathy); her six grandchildren, Ashley, Nate, John, Charlie, Jenny and Sarah; and her great-granddaughter, Leiliana.

The family hopes to have a celebration of her life at Glen Lake when possible and safe due to Covid-19. To stay apprised of those plans, or to contribute thoughts, memories and photos of Mary, visit https://www.bartonfuneral.com.