Hinsdaleans strengthen endurance and their friendships during the 2019 Ragnar event 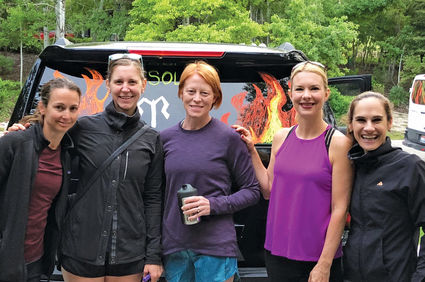 Two hundred miles and 24 hours to run it, with 11 sets of legs sharing the task.

Not everyone's idea of an inviting getaway. But that challenge is what drew a co-ed group of Hinsdale residents last June to the majestic Wasatch Range in Utah to take part in the 2019 Ragnar Relay.

Dozens of teams from across the country participate in the event, which spans from Logan to Park City. Each team member must complete three legs over the day-night-day time period. Team vans wait at interchange points for the finishing runner, who passes off the slap bracelet to his or her teammate. The vans serve as mobile crash pads as runners steal some sleep before the next assigned leg.

Hinsdale's Beth Folkmann is an avid runner who embraced the invitation to join from team organizers and neighbors Carol and Chris Wittemann. Running through the night on pitch dark roads required some advance acclimation.

"People do have to train to run at night and at different hours. You do have to prepare to run with a headlamp," Folkmann said.

She recalled one hilly leg that tested her limits but said the inspiring mountain vistas help with motivation.

"The scenery is gorgeous," she remarked.

The purpose of the adventure, as the Ragnar website states, is to "bask in the joy of achieving something together that you could never do alone." And there's no pressure to make a certain time, Folkmann related.

"You're running at your pace. It's just a fun event to bond with the people that you're with," she said.

Teammate and Hinsdalean Alli Mason confessed that timing was a bit of concern for her. Not a fan of running in the dark and with daylight fading, she exhorted the runners before her not to tarry.

"I kept telling everyone that I was scared of the dark," she said. "I would get to start my leg sooner if they ran faster, so we would be texting them and cheering them on the entire time."

Once she hit the ground, Mason told herself that she would encounter other runners along the way.

"I maybe passed like six or seven runners," she said. "There were long stretches where I didn't see another person."

Seven of the 11 members of the "Absolute Fire" team were from Hinsdale. But Mason said participants felt an instant connection, united in tackling the arduous task.

"It felt like this community of runners this entire weekend," she said.

While a few of her teammates were Ragnar veterans, Hinsdale's Claudia Stangle was a first-timer. Leaving the flat Midwest landscape and finding herself running in the mountains within 24 hours was quite an adjustment.

"I did the first leg (of the relay) and another leg in the evening, which was about two miles," she said. "The next morning when I had the 6 a.m. run, I really felt it. There was no gas left in the tank for that one."

Thankfully she could distract herself with the lovely river she rang along, shrouded in a morning mist.

"It was beautiful," she said

The mom of three said her family was worried about what she might encounter out in the wilderness.

"It's something different, especially running at night. They were also nervous that there were bears," she said. "But they were supportive. I'm so glad I did it. It was really fun."

Charlie Wittemann, son of Carol and Chris, was the youngest member of the team as a then-14-year-old.

"I remember just being really excited and thrilled to do something like that at my age," said the Hinsdale Central cross country runner. "It's such a bucket list thing to do."

Charlie said he tried to contain his nerves going into the race but admitted to being somewhat intimidated at the opening ceremony.

"It was kind of an overwhelming experience to see all these intense athletes participating," he remarked.

The team relied on his youthful energy to take on a seven-mile stretch that rose 2,000 feet in elevation - in the dark. He felt his drive waning toward the end, and then he saw the team van waiting up ahead.

The relay is paradoxically grueling and calming, he said, and the running was often the easy element.

"The toughest part was definitely sleep. I did not get enough sleep," Wittemann said.

Before the participants had decided whether Absolute Fire would reignite for the 2020 edition of Ragnar, the event went virtual due to COVID-19.

Last month the team members divvied up the 200 miles and ran them relay-style on local courses of their choosing.

Wittemann said the effort brought back fond memories of their Wasatch workout.

"Through the process of Ragnar and coming out of it, we have a shared connection and shared experience that's fun to look back on talk about with one another," he said. 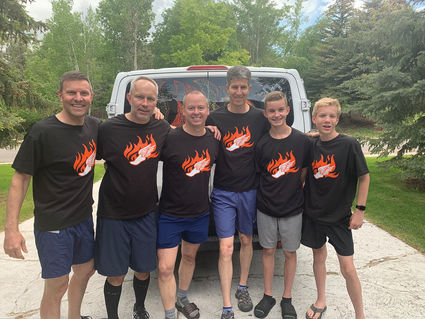