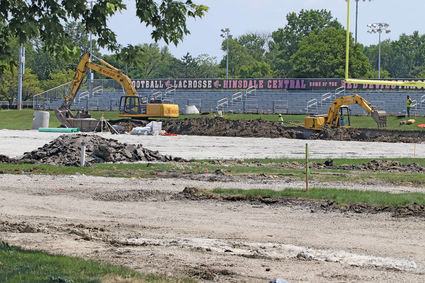 The 10-year-old artificial turf at Hinsdale Central's Dickinson Field is being replaced this summer as work begins on $140 million worth of improvements at both campuses in District 86. "It's a rallying point in my opinion for the community to watch at both buildings as things have developed - and that's cool," board President Kevin Camden said. (Jim Slonoff photo)

Hinsdale High School District 86 Superintendent Tammy Prentiss could barely contain her enthusiasm as she talked about the construction work taking place this summer.

"There are some pretty amazing engineering feats going on, particularly at Hinsdale Central," she told board members at their June 25 meeting.

One is easily identified by the giant pile of dirt on the soccer field off Madison Street. A large storm trap is being installed under the field to compensate for the loss of the retention pond at the site of the new pool.

"We were actually able to solve two problems," Prentiss said. "Historically there have been horrible drainage problems there."

The traps will hold storm water in the event of a large rain, releasing it slowly so the site does not flood.

"They are fitted almost like a jigsaw puzzle," Prentiss aid. "It allows for the water to go up and down as it needs to across the whole property at Central."

She's also fascinated by the auguring taking place so drainage and sewer pipes can be installed 15 feet underground to connect to 55th Street.

"These big drill bits are going horizontally underneath the property," she said.

"It truly is a spectacular thing to see," she told board members.

Several other projects are under way this summer at Hinsdale Central and Hinsdale South (see sidebar) as the district begins to spend the $140 million voters approved in April 2019 for facilities improvements.

"I'm excited for the community primarily," said board President Kevin Camden, who also serves as co-chair of the facilities committee. "There was clearly a big push over a long period of time to make this happen. I'm excited it's bricks and mortar so the folks can actually see what the benefit is."

Among the more noticeable improvements is the replacement of the 10-year-old artificial turf at both high schools.

"I've seen students at South already out on the practice field," he said.

He's also excited that crews are beginning to dig for Central's new pool and about less exciting mechanical work. In the latter category, the district is working with utility companies to relocate electric and gas lines in preparation for the Phase 2 projects that will begin next year at Central.

"Next summer when those massive additions are happening, we will have already moved the gas and electric," Prentiss said.

The closing of schools in mid-March due to the COVID-19 pandemic gave workers a head start on the summer projects.

"We clearly got four weeks of construction time," Prentiss said.

That extra time easily could have been eaten up by a host of problems, from worker shortages to supply chain issues. Camden said he's grateful that was not the case.

"Things are coming along well, and I really do give a lot of credit to our partners in the trades, the folks we have brought on to advise us," he said, referring to Cotter Consulting, Pepper Construction and Arcon Associates.

The extra time is especially important at Hinsdale South, where the special education department and library are being renovated.

"We said the library can open late," Prentiss said. "It's not even an option to have the special ed department open on time. I think that has been a relief to get all the interior work done on schedules."

The work is within 1/2 of 1 percent of the budget, Camden said.

"I'm just ecstatic that we're right were we need to be," he said.

The construction schedule anticipates the return of students to their classrooms this fall, even though the district still is working to come up with a plan that meets state guidelines.

Even though only a portion of the projects voters approved in the referendum will be completed this summer, Prentiss believes students and staff will notice improvements whenever they return.

"There will be parts to every student's day that they will see and feel the referendum at work already," she said.

Crews have started on more than $52 million worth of work this summer at Hinsdale Central and Hinsdale South high schools as part of the Hinsdale High School District 86 Future Ready Facilities initiative.

Here are the projects that will be completed at both campuses during the first phase of construction.