Longtime resident muses on being a dad 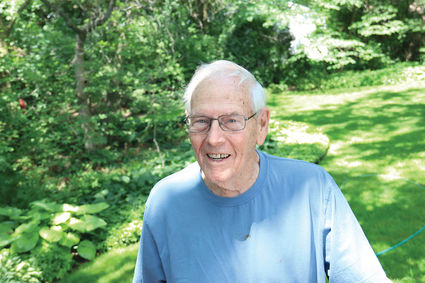 Bob Hinkle HAS LIVED IN HINSDALE FOR ABOUT 50 YEARS • MEMBER OF GRACE EPISCOPAL CHURCH • NATIVE OF DONNA, TEXAS • GRANDFATHER OF FIVE • MARRIED TO BARB FOR 55 YEARS

Fatherhood arrived decades ago for Hinsdale's Bob Hinkle, 89. Dad to son Rob and daughter Kristin, Hinkle said the experience has been joyful - and fast.

"One thing I've learned is that (time) speeds up," as a parent, he said.

Both children have kids of their own now. Rob is a doctor in Baton Rouge, La., and Kristin is a veterinarian in Columbus, Ohio. Hinkle remembered Rob as an easy baby.

"He didn't cry much. He was pretty good," he said.

Pre-parenthood the couple lived in both Indonesia and Ghana as Bob worked on projects for his employer, Chicago Bridge & Iron Co.

They then settled down in Hinsdale and started a family. Rob became a Boy Scout, and Bob accompanied him on summer Troop trips to Philmont Scout Ranch in New Mexico.

"One thing I remember is one evening, we were sound asleep and suddenly there was a bear trying to get our food. He was pretty fast, but he didn't get our food," Bob said.

The campers made a commotion to scare him off.

"It was important - we wanted to eat!" he quipped

In high school, Kristin developed an interest in animals and traveled to the Caribbean on a research project through the Shedd Aquarium.

"Krissy is a wonderful person, in my opinion," Bob said.

Barb read from a letter Krissy wrote years ago about a road trip home from California she and her dad took. A huge traffic jam in Nevada prompted Bob to get counsel from some truckers about an alternate route.

"We found ourselves basically in the wilderness, and the homes all had shotgun holes in them," Krissy wrote. "I was really wondering if were going to be lost in Nevada.

Bob said he tried to instill a spirit of perseverance and resourcefulness in his kids.

"They always made it home. They always found a way," he remarked. Rob's senior year at Hinsdale Central, he decided he wanted to pursue piloting like his dad. Bob bought an airplane and they bonded over a shared passion for the skies.

"Rob and I flew together," Bob said, crediting Rob for helping him become a better pilot. "When he was learning, we would go out sometimes at night, and that was kind of fun, seeing the sparkling cities below."

From shooting bow and arrows to building snow forts, interminable road trips to seeing his children succeed in their careers, Bob cherishes the unexpected delights he's had as a father. He also remembered Rob getting in a little mischief, as boys have a knack for.

"It was fun being a parent - most times," he laughed.

Bob advised young fathers to make the most of the fleeting years they have with their young ones.

"Do the best you can because they're pretty important," he said.