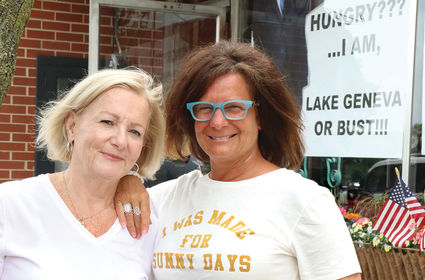 Cissy Rallo (right) and her mom, Kathy Barbara, have owned Page's since 2014. While they're anxious to open an outdoor seating area, they said it's important to be smart and transition slowly as they add al fresco dining to the current carry-out business. (Jim Slonoff photo)

When Cissy Rallo heard the news that Gov. JB Pritzker was closing down eateries due to the COVID-19 pandemic, she froze.

"I think I was in shock, and I wasn't thinking about anything other than, 'What are we going to do?' " she said. "I not only physically shut down, I mentally shut down, too."

She remained in that state for about two weeks, until customers and friends began offering some gentle prodding.

"A bunch of people started reaching out to me and saying, 'Do your doughnuts,' " she recalled. "I thought, 'Well, how much will that bring in?' "

The answer was much more than she expected.

"I missed that one," she admits. "I guess I needed a reminder of how popular my doughnuts are. I'm going through over 500 doughnuts a day. That's a lot."

Rallo, who owned a general contracting business for years before moving into the restaurant realm, developed her apple cider doughnuts while running a catering service. When she and her mom, Kathy Barbara, bought Page's in 2014, she decided to serve them there.

Once she came to the realization that she could sell her doughnuts on weekends, it didn't take long for her to decide to offer carryout as well.

"When we opened, boom! - here comes all the business in," Rallo said.

Customers were generous, often paying more than their bill, which left Rallo feeling grateful - and a little uncomfortable.

"For me to have to ask for help, that's my father coming out in me. We don't ask for help. We figure it out," she said. "I had to swallow my pride and take the help where it was."

Rallo said she knew she would have to do whatever it takes for Page's - which celebrates its 40th anniversary next year - to survive.

"I feel like that's my job now, make sure Page's stays around for as long as it possibly can - and Page's has to survive this," she remarked. "It has to. There is no way I'm going to let it go away."

With many restaurants opening for outdoor dining last Friday, Rallo expects to open Page's patio, which is just south of Hinsdale Avenue on Village Place, on June 12. The hours will be the same as she's doing for carryout - 8:30 a.m. to 1 p.m. Friday to Sunday.

The patio will have five foldable, six-person picnic tables with market umbrellas. Customers can order carryout and eat it at one of the tables or sit down and be served by a member of the wait staff.

"My thought is that we probably, until we open inside, we'll do outside dining in tandem with carryout on Friday, Saturday and Sunday," she said. "That makes more sense because we're here and we're paying staff anyway."

Rallo's earliest memories of Page's are of eating breakfast there with her mom when she was a kid. Now she enjoys seeing everyone from high school students to local business owners filling the booths.

"I've grown in love with this place," she said. "It's my second home, my second family."