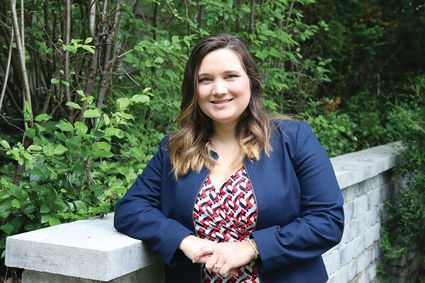 Aspiring lawyer Allison Lantero of Hinsdale cites her grandfather, a former judge in DuPage County, as her inspiration for pursuing a legal career.

"My dream is to one day be a judge like my grandfather," said Lantero, a rising third-year student at Notre Dame Law School. "I'm someone that has a really strong sense of justice."

She's blazing path of her own, however, evidenced by her recent selection for the American Constitution Society's 2020 Next Generation Leaders program. She and the 25 other recent and forthcoming law school graduates chosen "have demonstrated special leadership in their work with ACS's student chapters" and are leveraging "that talent to becoming the next generation of progressive leaders across the country," according to an ACS statement.

Lantero decided to defer law school for several years following undergrad witnessing the difficulty many were having getting hired by law firms. She instead spent seven years working in public affairs for the U.S. Department of Transportation and U.S. Department of Energy.

"When you work in communications, you learn a little bit about everything," related Lantero, who also earned a master's in journalism at Georgetown University while in D.C. "You hone the skill of being able to ask the right questions."

Reverting to student mode for law school after working full-time was challenging. But Lantero found a community in Notre Dame's ACS chapter,

"It really kind of gave me home and really made me feel like I was heading down the right path," Lantero said of the group, characterizing it as the liberal counterpart to the conservative Federalist Society. "Our goal is to make sure the underrepresented voices are being heard and protected. "

Lantero served as president this past year, implementing a strategy of engagement that earned recognition from the national organization.

"It means putting together a weekly newsletter and planning events to make sure our voice is heard on campus," she said of the leadership role. "We ended up having a really great year."

Lantero she was encouraged by peers to apply for the competitive NGL program, and her selection gives her access to training, individualized career support and other resources from American Constitution Society staff. She returned to Hinsdale in March to finish her classes online due to COVID-19 and is presently working remotely for a Chicago law firm. Her dream of ascending to a courtroom bench keeps her motivated.

"I like the idea of being able to make those decisions and helping shape the law and people's lives," she said.

Mixed in with her legal treatises next school year may be a few bridal magazines, as Lantero got engaged this spring. The wedding is slated for next year.

"After I've taken the bar," she noted.