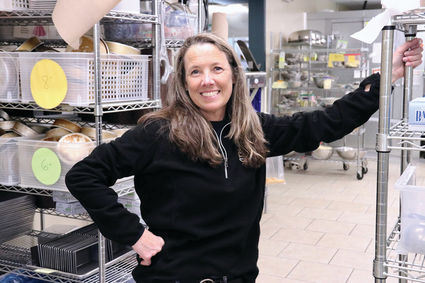 Sweet Ali's Gluten-Free Bakery owner Ali Graeme said operating amidst COVID-19 has required adjustments. But she expects some of the lessons to have lasting effects in serving clientele. "I take it one day at a time," she said. (Jim Slonoff photo)

The majority of the sales at Hinsdale's Sweet Ali's Gluten-Free Bakery have historically come from walk-in patrons.

When COVID-19 altered that history two months ago, owner Ali Graeme knew her store had to adapt.

"Most of our orders were not pre-orders," she said. "People were calling without a clear idea of what they want and didn't know what we had."

With no display cases of goodies to steer their selection, phoning customers required significantly more staff time to complete their orders. A more streamlined point-of-sale (POS) system was needed.

"We made taking orders more efficient working with our POS suite," Graeme related. "We've tried to build up our online menu so it's easier for them to decide what they want."

Since opening at 13 W. First St. in 2009, Sweet Ali's has built a loyal following locally and around the country. So much growth, in fact, that in February work was completed converting the adjacent storefront into a expanded bakery. That has turned out to be a mixed blessing.

"We were on top of each other in the (old) store, so we could do more social distancing within the bakery, which that was the good part," Graeme said. "But the bad part was we now had that additional expense."

"We felt something big is going to happen. I don't think I really understood what all that meant," she remarked.

After a quiet first week under the new restrictions, Graeme said the front of the store was reconfigured and reopened to allow social distancing.

For those not wanting to exit the car, the store has been permitted to mark the parking spaces out front with numbers to coordinate order pickups.

"We had to organize our processes a lot," she said.

On the baking side, ingredients in high demand universally - like eggs and yeast - have proved difficult to acquire at times. Paper towel consumption is impossible to avoid, Graeme admitted, but the staff has learned to make in-house hand sanitizer.

"In challenging circumstances, people rise up and do things they didn't think the could do," she said.

The store has also added savory family meals to its menu for those that need a break from cooking, and she's selling DIY baking and cookie decorating kits for those spreading their culinary wings.

"We're trying to adapt to a customer base looking to do more at home," she said.

Having some staff with children remote learning at home means dealing with employee absences, which usually translates into more hours for Graeme.

"We have to rethink the business. You've got the production side, and then you've got the planning side," she said, noting that, when restrictions are officially lifted, she'll be taking a cautious approach.

Whatever the future holds, Graeme said Sweet Ali's expects to be a part of it.

"We plan to be around, to be nimble and to try and figure it out," she said. "I am optimistic. I think we put together a good product and we try to make it easy for people to access.

"Hopefully we'll come out of this stronger than before."