New mom embraces the joys and struggles of parenting 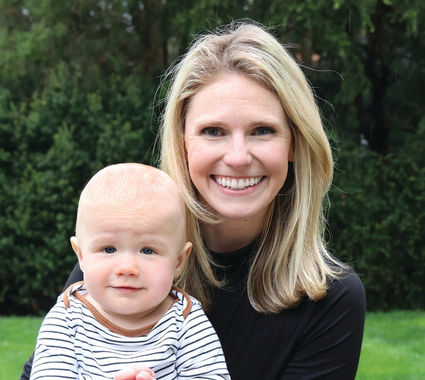 Before returning to her native Hinsdale last October, Sarah London became a Manhattan mom with the July birth of son James Wyatt.

Determined to be parents on the move, she and husband Jack set out one lovely day for family fun to the fullest.

"We went to brunch, then took a ferry to Brooklyn," London related. "We had to walk home from downtown Manhattan and it started raining. That night I couldn't get James to calm down."

At her wit's end, she called the person she knew could settle her with seasoned counsel.

"He's probably overstimulated. You're just going to have a bad night," London's mom told her.

Outings now consist largely of neighborhood walks, during which London connects with neighbors and James practices his waving at people, trees, butterflies, whatever he encounters. Blessings amidst the pain of the pandemic, another of which is being home for Mother's Day.

"I was actually supposed to be on a work trip," said the corporate event planner. "We were going to celebrate another day."

Being thrust into the stay-at-home-mom world has given London a deeper understanding of the job's demands.

"It's never-ending, and it's kind of the best and worst thing," she said. "It is constant and it's hard. I have a huge new appreciation for the patience and the complete selflessness needed in keeping a house clean and food stocked and laundry done."

James is one of five young boy cousins in the close-knit family, and London looks forward to seeing them grow up together. She expressed surprise at the absence of anxiety she thought parenthood would induce.

"I guess I'm more relaxed about everything than I thought I would be," London said. "I was very calm throughout the pregnancy."

Having a strong role model has undoubtedly had something to do with that.

"I'm very close to my own mom, and I'm excited to have a relationship like I have with her," she said.

Tasks like sleep training become more bearable hearing that "things get better" from those further along the journey.

London has learned that, unlike the professional conferences she meticulously arranges, children don't always run on schedule.

"They don't really follow the plan. There's no playbook," she said. And that's OK. "Babies are resilient."

With both she and her husband working from home, "we kind of bounce him back and forth between calls," she said. "He's an active little boy. Every day there's something a little bit new."

James bears a strong a physical resemblance to his father. Well, except for one feature.

"I think he's got my smile," London remarked.

On Sunday, she envisions enjoying a nice grilled meal and outdoor activities. Her longer-range desire is to mark James' first birthday with all their loved ones on site, not just on a screen. For now, she cherishes making memories she never would have otherwise.

"When he just cuddles into me, that's just the greatest feeling in the world," she said.