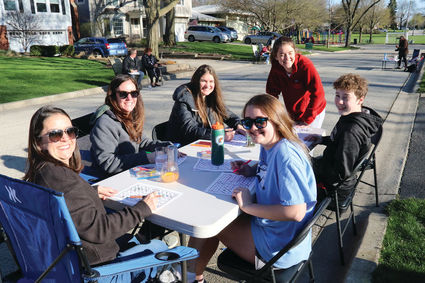 The Sanders (left) and Smith families along with four other families enjoyed the outdoor Bingo game neighbor Liz Sant organized for the 800 block of South Quincy Street earlier this month. (Jim Slonoff photos)

Fewer commitments and plentiful free time sound like the perfect ingredients for a good time.

But mix in a stay-at-home order and social distancing precautions, and having fun is lot harder than it used to be.

Favorite forms of entertainment - eating out, seeing a movie, getting together with friends - are simply not available right now. So Hinsdale residents are putting in a little work to make sure family and friends are finding ways to enjoy themselves.

Katy Altemose created two detailed scavenger hunts to keep her kids busy. On April 18, her sons - Jack 12, and Luke, 9 - competed against 10 other sixth-graders from Hinsdale Middle School, many of whom also teamed up with a younger brother to complete the challenge.

She will work with daughter Emma, 8, on a slightly revised mother-daughter challenge Saturday.

"I think families in town are all looking for fun, creative ideas for their kids, especially outside when the weather is nice," Altemose said. "I thought if I combine something that touches on physical activity with knowledge about things they're learning in school with things that give them a sense of being grateful for what we have here, that would be great."

So the "challenger hunt" she's prepared for Saturday asks teams to do activities like jumping jacks and sit-ups, share information about specific locations in town and write thank you messages to first responders.

In addition to the 20-stop challenge, Altemose also created a scoring matrix to help determine the winners, who will be announced in a Zoom meeting. The prizes - which include gift cards and money to donate to a charity - reinforce the message she hopes is inherent in the event: have fun and help others.

"We're always trying to all teach our kids about giving back, especially during times like this," she said.

She enjoyed setting up the challenge for her sons and is looking forward to teaming up with Emma on Saturday.

"I feel so blessed to be in a position where we do have all this time together," Altemose said.

Neighbors on the 800 block of South Quincy Street enjoy getting together, something they haven't been able to do since March.

While Liz Sant was looking for family activities to post on her company's website, she came across an idea for outdoor Bingo.

"Wow - that is so fun because it's something you can do kind of in person but still far away," said Sant, who is assistant director of organization development at Crowe LLP.

She found a Bingo card generator online, so everyone could print their own cards and set a date and a time. Neighbors were told to bring their own tables, chairs, markers, food and drink.

"It was basically everybody create your own party with the supplies I'm emailing you and the stuff you have at home," Sant said.

One neighbor brought an old-fashioned Bingo cage and balls and served as caller. Despite the lack of prizes, neighbors took the game seriously.

"It's funny how friendly competition comes right out," Sant said.

The group included six families, with adults and kids ranging in age from sixth grade to a college sophomore.

Hinsdale police also made a brief appearance after receiving a complaint about a gathering of more than 10 people. They left shortly after learning that everyone lived on the block and had been maintaining a distance of at least 15 feet from one other.

Sant hasn't finalized plans for the next neighborhood gathering, but she's got some ideas.

"We could do a bags tournament where you just threw bags with your family but you played against the other people down the street," she said. "We will think of something."

When Elisabeth Anos has finished her online assignments from Avery Coonley School, she enjoys having a creative outlet. She's found it in Studio 415, The Community House's livestreamed arts classes.

"I think my mom found it one day on Facebook," the seventh-grader said. "Every time we can do it, we end up sitting down and doing it."

She has enjoyed painting the cover of a record and learning more about contour drawings. That exercise began with a warm-up in which she had to draw another person with her eyes closed.

"I'm also working on something similar in school, so I got to practice it and learn how to do it with a different teacher," she said. "It's really fun."

"If somebody comments, he brings them into the lesson and he really does a good job," she said, adding that it's important to support agencies like The Community House. 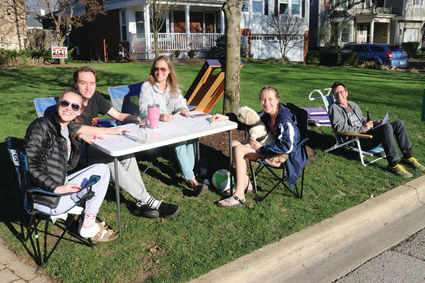 "Everybody is trying to do their best to make it through the day, and this is one more thing that is a little bit of an escape," Artemis said.