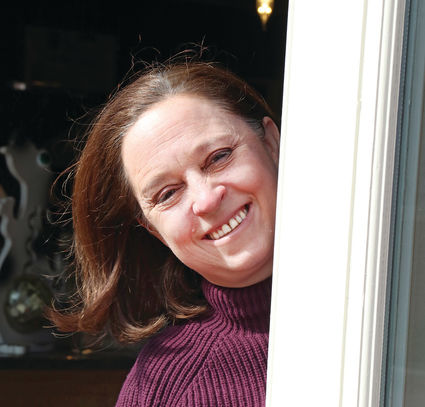 Café la Fortuna owner Angela Lavelli said switching to a carry-out/delivery only business due to COVID-19 was a challenge at first. But she said the response from patrons has been touching. (Jim Slonoff photo)

Cafe la Fortuna owner Angela Lavelli said she didn't think her Hinsdale business would be able to continue operations when Illinois eateries were ordered to cease dine-in service last month due to the COVID-19 pandemic.

"I was thinking that I was going to be closing down," she said, noting the coffee house doesn't carry many food items.

One month later, she's still brewing up a storm at her 46 Village Place shop.

"I am really thankful," she said. "(Customers) from Hinsdale, from Clarendon Hills, from Western Springs, they keep coming."

Transitioning the business from walk-in to mostly phoned in orders was not easy, Lavelli admitted.

"I was a little overwhelmed," she said "Sometimes I just said, 'Oh my goodness!' But in the morning, it's so exciting when the phone starts ringing and the orders start coming in."

Café la Fortuna is open from 7 a.m. to noon (see full listing of hours for Hinsdale eateries on Page 22) for curbside pickup as well as non-contact delivery in Hinsdale and Clarendon Hills.

Because of the small size of the shop, Lavelli and her employee, Richard, try to be the only ones inside. She expressed gratitude for all the support she's received.

"I had the feeling all my friends and customers would help," she said. "They asked, 'What do you need? People keep going and making me work and keeping my business open. I can only say that I have the best customers."

A kind of solidarity has also percolated among the village enterprises in their shared challenge. She has been selling doughnuts from Page's Restaurant at the café on the weekend, and eateries have been promoting her coffee.

"We are trying to support each other," Lavelli remarked. "I'm sure as a community we could get out of this stronger than before."

Delivery service has been a new dimension to the business. Thankfully she had an in-house crew ready to deploy.

"My three children are the ones who are doing the deliveries," she said.

Café la Fortuna, which stakes its popularity on roasting their own beans imported from Chiapas, Mexico, opened in Hinsdale in 2012. Over the last several weeks, Lavelli has learned that some are still discovering the alley outpost.

"We have a lot of new faces. It's like there's a lot of people who didn't know that we were here," she said, suggesting a silver lining within the adversity.

Thankfully, her suppliers have been able to keep up with the demand.

Even with the shop being open half the day, the level of activity has kept her schedule full.

"We were not organized for what we are doing now," Lavelli acknowledged.

And she eagerly awaits the day when Café la Fortuna can fully reopen, recognizing that an extended stay-at-home order will put additional pressure on households to budget their resources. But a relaxation of restrictions should be in a way that maintains safety.

"I really hope that everyone stays healthy so that the economy can recover," Lavelli said.

"Hinsdale is a great community and everyone cares about each other," she added. "I feel blessed to be here and am so thankful for all my customers."