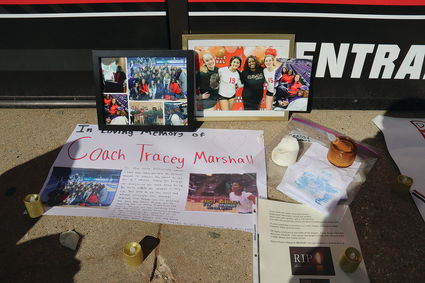 Dealing with the loss of a high school coach would be difficult for students at any time.

The Hinsdale Central varsity volleyball players who are mourning the loss of coach Tracey Marshall are finding it even more challenging during the COVID-19 pandemic. Marshall passed away unexpectedly at home April 2, according to a brief obituary posted online by the McCauley-Sullivan Funeral Home in Bolingbrook. She was 42.

"It's a difficult time to pass away," said senior Natalie Newmann of Hinsdale, who played for Marshall for the two years she coached at Central. "It's harder than it was to honor that person."

Many team members and their moms gathered at school the evening of April 3 to create a small memorial for Coach Tracey. They all stayed six feet apart, Newmann noted.

"We just brought flowers, pictures, little things that reminded us of her and just kind of sat around and shared memories," she said. "It was really nice."

Central athletic director Dan Jones helped with the memorial and also tied the red and white ribbons students dropped off around trees and poles on campus. His heart goes out to the team members as they deal with this loss.

"When I was hanging up ribbons, I did run into a few students and as best I could helped share in their grief," he said. "They can't grieve properly and they can't be together to help in the process."

Jones said he hired Marshall as head coach of the girls varsity program in 2018 after hearing good things about her.

"She was highly recommended because of her knowledge and her experience," he said.

Marshall didn't teach at the school, so Jones did not know her as well as he might have.

Junior co-captain Brooke Cooper said it was the time Marshall spent with her off the court that changed her life for the better. She recalled a particularly tough day after practice when she was at a loss as to how to calm herself down. Marshall spent the next two hours with her.

"I've never had anyone do that for me before - the way that Coach Tracey found the right words and talked me out of this extreme panic I was in," Cooper said.

"She honestly always knew what to say to make me feel better," she added later. "Whatever problem I had, she had an answer and every single answer had a purpose and meaning behind it. I'm going to take every single piece of advice she gave me for the rest of my life."

Marshall was tough, Newmann and Cooper agreed, and taught the girls how to be more resilient, too.

"She kind of saw that our program was not doing too well and not winning, not working very hard," Newmann said. "She came in and changed that up a lot - made our practices tougher, got the program back on its feet again."

Marshall resigned after the 2019 season, but Cooper had been looking forward to seeing her at club volleyball games this spring. She wants people to remember what a big heart Marshall had.

"She was the most caring person in the entire world," she said. "I've been trying to tell that to everyone I see."

Nilly Ads said she will remember Marshall's passion for the game and the level of trust and support she built among her players. That made a difference to her as a freshman joining the varsity team.

"They were so welcoming. They let me in. They took me in," she said.

"Every day I thank God I had one season with her," Ads said. "I'm just grateful for her."