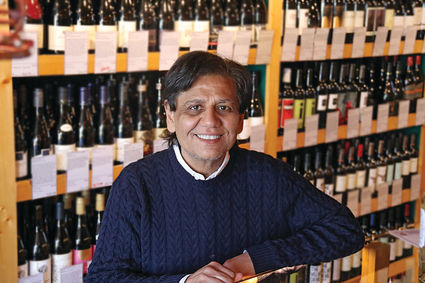 Sean Chaudhry, owner of Hinsdale Wine Shop, said keeping his business open and promoting other businesses in town has become his No. 1 priority during these unusual times. (Jim Slonoff photo)

Many Facebook pages are filled with inspirational messages or coronavirus jokes. Sean Chaudhry's reads like a promotional piece for Hinsdale businesses.

Last week, he enjoyed burgers, nachos and banana bourbon pudding from Fuller House for dinner. The week before he encouraged friends to support Page's Restaurant when it opened for takeout the last weekend of March.

Of course he's also posted information about his own business, Hinsdale Wine Shop. Many feature the "Quick Grab" case of wine (four white and eight red) he's selling right now. He's offering curbside pickup or delivery and said the response has been great.

Chaudhry said he's being careful to stay away from people when he makes a delivery and is using a lot of hand sanitizer. This is a great time to buy wine, he said, with wholesalers scrambling to sell the wine that restaurants normally would purchase.

"They are offering me much, much better pricing," he said. "A lot of the really good wines are now all of a sudden very affordable."

Hinsdale is a great place to own a wine shop, he said.

"We live in a highly affluent, highly educated and highly successful society, and wine itself is an intellectual experience," he said.

Hinsdale Wine Shop and Chaudhry's Downers Grove restaurant, The Cellar Door, are listed as essential businesses and able to remain open during the stay-at-home order. But the revenue stream certainly has changed from last year and the first two months of this year.

"2019 was such a good year economically for small businesses, unemployment was 3 percent. I've never seen anything like it in my 30 some years of being in the United States," Chaudhry said.

"2020 was headed to a great start. People were optimistic and then this came out of nowhere," he continued. "This is something that nobody predicted and such a crushing blow to the economy, to people's personal lives."

Chaudhry appreciates the support he's received from customers in Hinsdale and Downers Grove and said he hopes all local businesses are getting the same support. That's what he's been working to promote on his Facebook page.

"In Hinsdale, it's all about the community. I've been downtown since 2003 and all the fellow merchants, many of them are good, close friends of mine. I know them. I know their families," he said. "I think it's important that we support each other. By uplifting each other is how we uplift the community and make sure the town survives."

If any businesses in downtown Hinsdale fail, it affects all merchants, he noted. Strategizing to protect his business has helped him preserve his sanity during these strange times.

"That has been my focus and my goal," Chaudhry said. "Every day that's what I get up and fight for - to make sure my business survives.

"As long as you continue to support us, we'll be around."