From prep to adult athletics, COVID-19 has stopped competitions in their tracks 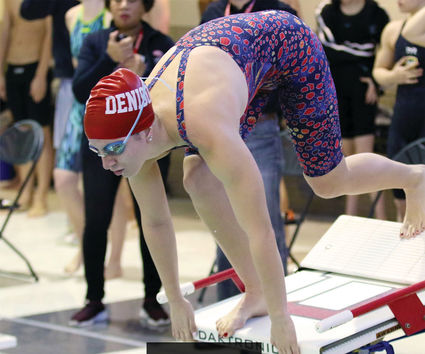 Hinsdale's Mia Chiappe, a junior on Denison University's Big Red swim team, missed out on a chance to compete at her third consecutive NCAA Division III Championships last weekend when the meet was canceled, along with all other college athletics, due to COVID-19. (photo courtesy of Denison Athletic Communications)

The race to stop COVID-19 has meant unfortunate halts to many normal rhythms in society, with sports disruptions being among the more high-profile.

Central graduate Mia Chiappe was preparing to swim with her Denison University teammates at the NCAA Division III championships last week when she got devastating news, first from an online post, then confirmed by her coach: all NCAA events were canceled.

"We all sat together down at the pool wondering what to do next," recounted the junior freestyler. "We were all very sad to hear the news. Everyone was crying and in disbelief. No one saw this coming and we really were holding out hope for a different outcome."

Chiappe said the team had four days together on campus before the school closed and decided to make the best of it.

"Saturday we hosted our own meet to give those who wanted to swim a chance to compete one last time," she said. "

The program had high hopes this year, having already won its conference championship. Chiappe, a four-time All-American, was eager to add to her accomplishments.

"The toughest part has been knowing that this was our year. From Day One the goal has been to be the team at the top of the podium at NCAAs and to have that abruptly taken away from us was painful," she remarked.

Chiappe said the experience, while still raw, has taught her not to take plans for granted.

"I think this shows that not everything that you think you have will be there," she reflected. "We have to work even harder next year to even come close to achieving the goal we set out for this year. We are losing a large amount of the national team, so it will just take more hard work and determination to be in the same spot next year."

Marty Brennan, president of the Hinsdale Platform Tennis Association, said the association's Men's Hinsdale Open was scheduled for last weekend was postponed after consulting health officials, including medical professionals within the association's membership, and as governmental guidelines to combat the threat of the coronavirus became more acute in nature.

"We felt it was in the best interests of our paddle community to postpone the event and maintain a healthy environment around the KLM paddle facility," Brennan said.

The tournament has been tentatively rescheduled for April 18-19. On a positive note, the Women's Open tournament was

able to be held Friday.

At Hinsdale Central, sports-related activities are on hold until at least April 6. With schools having different spring breaks and the Illinois High School Association targeting March 31 (as of press time) to resume, Central athletic director Dan Jones said there's a lot of variation and uncertainty.

"I have a feeling that everything is just on hold and we're going to wait and see how things proceed," Jones said.

With Centers for Disease Control recommending no gatherings of 50 people or more, he noted, such a restriction would certainly impact events like track meets.

As the president of the Illinois Athletic Directors Association, Jones said he is convening a meeting today, Thursday, to try to chart a course forward.

"Our (IADA) conference is May 1, and we're going to be talking about postponing that until July," he said. The first state meet scheduled is badminton the second weekend of May, and Jones, while reluctant to speculate, believes an April 6 return is ambitious.

"Right now I don't see anything coming back until the middle of April. I think they're just going to keep extending this," Jones said. "Right now everyone is waiting and seeing what directions we get from the health department and the state."

He encouraged Red Devil athletes to follow the guidelines on social distancing and, if necessary, quarantining.

"Hopefully everyone stays healthy and we can get back as soon as possible," he said.

For Hinsdale Central grads looking forward to putting the cap on their college athletic careers in their senior campaigns, their sudden and unwelcome finish lines due to the COVID-19 response was especially hard to accept.

Two shared their thoughts with The Hinsdalean.

“It has been rather difficult to reconcile with the fact that I will never be able to prove my athletic ability on the track in the same context again. Years of injuries meant seasons cutting short so my potential was never met. The chance for redemption was removed.

“I think for us seniors, we are experiencing a bit of an identity crisis. While we will continue running after our collegiate careers and are looking forward to competing individually in marathons and other events, there is something completely different about running for a team. This will be the hardest change for me to accept, as I have been immersed in a team atmosphere for the past eight years.

“The heartbreak I am experiencing is relatively minor in the grand context of the world. This is for the greater good and I am simply doing my part in mitigating the spread of the virus. It was certainly not how I expected my collegiate experience to end and something I would never wish on anyone else, but it is the reality.” — Yuji Cusick, cross country/track, New York University

“Words really can’t describe how I felt when I received the email that my time as a collegiate athlete was over. More than anything, it was hard to know that so many experiences were taken away so suddenly. It hurt to know that I will never get the chance to lace up the spikes that have carried me so far, to hug my teammates after a relay or to cross the finish line knowing that all the hard work I put in was worth it.

“My teammates, both from Hinsdale Central and from Middlebury, were and will always be my best friends. They are the ones I have laughed with, cried with and shared so many life memories alongside. I am beyond grateful for the opportunity to have run for two incredible programs and will cherish the memories I have made for the rest of my life.” — Nathan Hill, cross country/track, Middlebury College