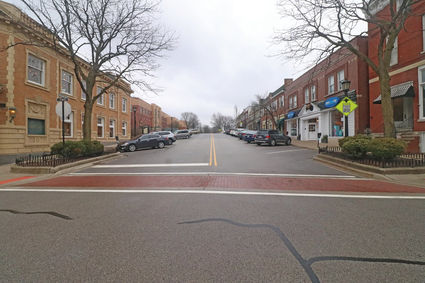 Vehicles line South Washington Street in Hinsdale's central business district on a recent weekday. The village board wants to open up more on-street spots for shoppers by having merchants and their employees use the Garfield Street parking deck, which is scheduled to be completed in June. But trustees take different positions on whether or not downtown parking should be free for everyone.

Hinsdale trustees are aligned on the notion of steering central business district employees to the soon-to-be-completed parking deck. But they diverge on whether residents and nonresidents should have the same access to on-street parking.

At a special village board meeting Monday, trustees conducted a first read of a proposal to convert the current metered spaces in the downtown to free three-hour parking (see map) and making the 189 spaces in the deck free for up to six hours. Officials said the six-hour limit is designed to deter commuters.

A primary goal of the effort to manage the expanding parking supply is to keep merchants and employees from occupying on-street spaces. Studies have shown they account for up to 30 percent of the vehicles in the downtown, and the hope is that free deck parking will greatly reduce that.

Trustee Matt Posthuma thinks nonresidents should also be encouraged to use the deck by making them pay the meters if they don't.

"I would like people's first reaction and first inclination when they're coming into downtown Hinsdale ... to be to go to the deck," Posthuma said. "I'm a little nervous that if we start making it free, then we're not going to properly incent people to be using the deck."

Trustee Jerry Hughes took issue with the characterization of downtown parking as "free" since residents' tax money was used to build the multi-million-dollar deck. The board recently decided to charge $8 more for the vehicle stickers residents have to buy each year as part of the comprehensive parking plan as well.

"The only people who would be getting anything for free are the nonresidents," Hughes said, arguing that maintaining a fee for nonresidents is a regulatory lever the village should not yet relinquish.

"I think it's a mistake to drop price as a tool until we know that we've solved the problem," he said.

Trustee Luke Stifflear replied that, while he appreciated the arguments for having different parking rates, simplicity ultimately is the better approach.

"I feel the convenience of not charging residents or nonresidents outweighs the points that you mentioned," Stifflear said to Hughes.

Under the proposal, fines for parking violations in the central business district would go up to $25 from the current $8. Parking enforcement would be administered by license plate reader technology, and vehicles would be ticketed for parking for more than three hours even if using multiple parking spaces within that time frame.

Trustee Neale Byrnes was troubled by the signage that would be required to alert downtown visitors to a two-tiered parking schedule.

"I just see that as a barrier, and I don't like to see barriers to sales in our business district," Byrnes said. 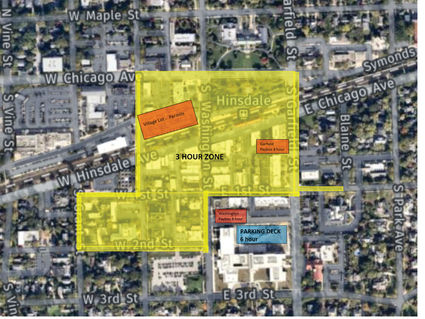 Village President Tom Cauley said the deck should be viewed as an infrastructure improvement for public benefit, just like reconstructed roadways.

"We fix streets and pay millions dollars to fix streets, and anybody can drive on the streets," Cauley said.

He said no other towns regulate parking based on residency and that free parking seems to be the norm among Hinsdale's neighbors.

Trustees Scott Banke and Laurel Haarlow were absent. The matter is expected to come before the board for a second read and a vote at its April 7 meeting.