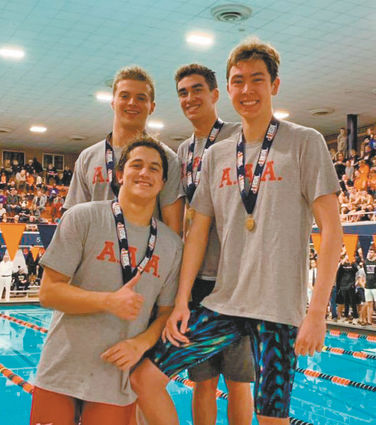 The Hinsdale Central boys swimming and diving team placed eighth over the weekend at the IHSA state meet at Evanston Township High School.

The team's total of 54 points placed it in the state's top 10 for the 10th straight season. Champion St. Charles North garnered 137 points, followed closely by runner-up Loyola Academy and third-place Glenbrook South with 135 and 128, respectively.

"We couldn't be prouder," Red Devil coach Bob Barber said of the outcome. "We exceeded expectations in many places."

Barber said the team tried to be "realistic" by setting its goal of a top-10 state finish.

But things quickly turned somewhat unreal after the team's 200-yard medley relay team led off the Saturday's slate of final races with a first-place tie for the title in a school record time of 1:31.31. (See full results on Page 41.)

"We didn't have a vision of state titles or school records this season, and to catch both of those on the first event on Saturday really set the tone for us," Barber said. "We did everything we could on Friday to ensure that we were well represented on Saturday to keep us in the top-10 hunt."

"It was my first high school state win, and it was better to do with the kids on the team," he said. "Nobody really had us in contention, but we knew we could win and we did.

"It felt like years and years of hard work culminated in seeing that come to fruition," Cullen continued, reliving the joy in seeing freestyler Ozgen seal the victorious tie with their Glenbrook South counterparts. "We were able to get to that wall without letting them beat us."

Barber credited his veteran relay members with helping their teammates manage their emotions, as the raucous crowd and phalanx of officials at the state meet can be intimidating for first-timers.

"They definitely carried us through," he said, citing Cochlan and Lahmann's state meet seasoning benefiting Cho and Ozgen. "They kind of led the way for Alexander and Erkan in both the physical and mental preparations right up to seconds before the race.

"I couldn't have done it with four rookies," Barber added.

"I'm super happy," said Benington, who also competed at state last year. "I'd never finaled before, so it was a pretty neat experience. Before the race, it was probably one of my most nerve-wracking moments."

"He was really the spark that kind of lit our fire. We weren't sure where we would stand with our individual events," he said, adding that Benington's strong finish was a fitting final stroke on a portrait in perseverance.

"His entire four-year career is one to write a book about," Barber related, chronicling Benington's journey from JV swimmer to state standout. "To watch his success along the way has been a lot of fun."

Benington was pleased with his results.

"It was a really good way to end my career," he said.

After an early season with numerous question marks over who could be plugged into which events, Barber said a healthy balance emerged and athletes stepped up. Among those who evolved was Cho as the swimmer to fill roles of swimmers lost last year to graduation.

"He really grew into the role physically and mentally," Barber said, saying his breaststroke performances were stunning.

"What he accomplished both on the relay and individual was fantastic. He went from a 59.9 relay time last year to a 57.4 this year. That's unheard of. That was a game changer for us and really gave the team an opportunity to rise to the next level."

Cho said the triumph was a group effort.

"We just gave it our all and it worked out really well," Cho said. "I still really don't believe it. I tried to visualize and dream about it happening the night before."

Cochlan said the state meet can be a microcosm of the season.

"There's a lot of highs and lows at the meet. So it's important to keep a good mindset and the handle the victories and losses," he said. 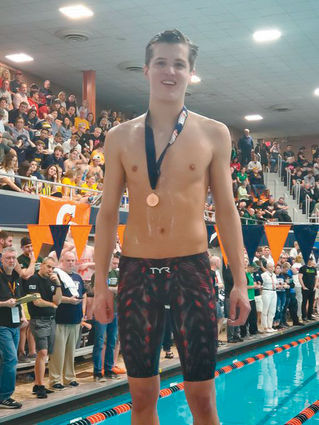 And they liked being able to sneak up on rivals this year.

"Everybody kind of saw us as the underdog, and we went out there with a chip on our shoulders," said the future University of Pittsburgh swimmer.

Etching a place for themselves in Central swimming's pantheon is rewarding, Cochlan said.

"Every year we've been able to come together and race toward one common goal," he remarked.