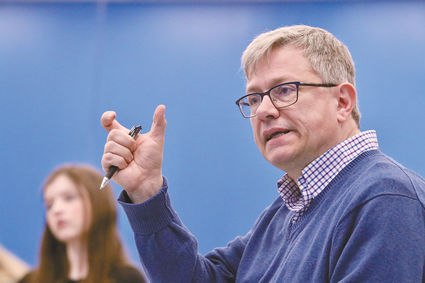 Melanie Lamoureux, BAM Theatre founder and artistic director, watches as her students perform for and receive feedback from Bob Mason, casting director for Chicago Shakespeare Theater. Charlotte Froiland of Hinsdale and James Leonardi were among the students who participated in the master class.

Bob Mason spent 15 years performing in musical theater before he became casting director of Chicago Shakespeare Theatre. He still remembers what it's like to audition - trying to perform while grappling with nerves and a sense of the unknown.

He knows a lot more now than when he started in the business, and he imparted some of that wisdom Sunday to students in the Hinsdale-based BAM Conservatory Ensemble.

"I was an actor and I always think, 'What do I wish someone had told me that would have saved me a lot of time and energy?' " he told The Hinsdalean Monday. "I feel like I've started to learn what those things are."

He played the role of a casting director at the master class, with 15 students presenting a song as if they were at an audition. He offered individual insights to the actors as well as general advice. A common theme of his critique was to make the song more personal.

"Try to convince yourself this is what you need to do to survive," he told one student. "Feel free to go overboard. Feel free to make a fool of yourself because that's why we're here."

He suggested another student pay more attention to the point in the song at which she poses a question.

"Really ask the question as if you don't know the answer," he suggested.

He encouraged students to have a second song prepared if the director asks to hear something different. Kiki Sikora, who sang "What It Means to be a Friend" from "13," performed "Killer Instinct" from "Bring it On" as her second piece.

"It's a great song for you because you look like you don't have one," Mason joked with her.

In an effort to make it more convincing, he asked her to sing the song to her peers.

"This time I want you to actually get in their faces," he said.

She did - and offered a completely different version of the song.

Student Hayley Johnson of Hinsdale attended a master class almost 10 years ago, accompanied by her older sister, Shannon, and led by Jim Cordi, artistic director at the Paramount Theater in Aurora

"He had my sister sing and she was really focusing on her voice," Johnson recalled. "He gave her one critique and her whole performance changed."

Cordi led a master class again this year, on Feb. 23, and Johnson sang for him then. She had the opportunity Sunday to sing for Mason as well.

"They are so different but so amazing in their own ways," she said of the two professionals.

Her rendition of "Say the Word" made quite an impression on Mason.

"Your voice is crazy good," he said.

"That's a song I've been working on for a couple of months with my voice teachers," Johnson said Monday. "To get some recognition for it was really cool."

She said anxiety can be hard to manage when singing for someone who is distinguished and knowledgeable, but she credited Mason with putting students at ease.

"I don't think anyone felt judged or evaluated in a poor way. I think he made it very clear he was there to make everyone better," said Johnson, who plans to major in musical theater in college.

Making a change on the spot to a song that has been rehearsed for months can be difficult, she said.

Mason praised the students' willingness to put themselves in a vulnerable position.

"It takes so much bravery. It really does," he said. "When I look at the people who come in every day, I often wonder, 'How did I do that?' I often wonder how I had the guts to do that."

He also was impressed with the talent he saw.

"Some of those voices blew me away," he said. "It's amazing, the teenage talent pool. Twenty years ago the talent wouldn't be that developed at that age."

He said programs like those offered by BAM Theatre combined with students' dedication put young performers in place where they already sound great, and he can work with them on specifics.

"How do they make the song personal to them so no one else would ever sign it the way they sing it," he said.

The final master class this Saturday will feature Broadway actress Jessie Fisher. The series is the culmination of a yearlong curriculum for the 26 students who auditioned and earned a place in the ensemble, said Melanie Lamoureux, founder and artistic director of BAM.

"The program I designed for a more advanced actor who really wants that type of coaching, so we're hopeful that the students are receptive to the feedback, and so far I've really seen positive things come out of that," she said.

Lamoureux acknowledged the exercise can be a bit intimidating.

"Most of these students have never gone to a professional audition at one of the major houses in Chicago, and these are the individuals who cast those shows," she said. 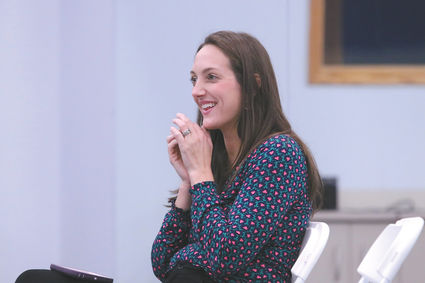 She has enjoyed watching her guests interact with her students.

"It's been really fun," she said. "I love Bob. I was his casting intern many years ago at Chicago Shakespeare. It was really lovely to bring him to my theater home in Hinsdale."