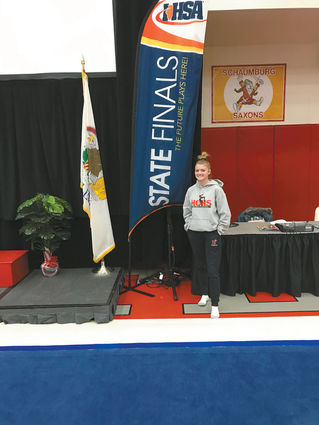 The Hinsdale Central wrestling program sent two competitors to the state meet this weekend, and both returned with All State honors.

Freshman Cody Tavoso came in sixth and senior Ron Kruse earned a top-eight finish at the tournament, held Feb. 20-22 at the University of Illinois State Farm Center in Champaign.

Tavoso lost to Charlie Farmer of Moline in a 6-2 decision in the fifth-place match at 106 pounds.

"Cody is a freshman who placed sixth at state, which is pretty remarkable," head coach Jason Hayes said. "He wrestled in a tough weight class."

Hayes has coached only two other Central athletes who placed as freshman - Juwan Edmond (2012) and Brian Allen (2011).

Competing at state has been a goal since the beginning of the season, Tavoso said.

"As soon as I got down there, I knew I had to let everything fly, try all my moves," he said. "Once you make it down to state, there's not really any time to be hesitant and cautious. You have to try everything."

Tavoso lost his first-round match to a particularly talented opponent.

"Losing to the eventual state champ in the first round and coming back in the wrestlebacks shows a lot of heart, a lot of pride, a lot of determination," Hayes said.

When Tavoso checked the bracket after the loss, he saw he was slated to wrestle a kid he had beaten this season.

"That gave me a bit of confidence," he said.

He went on to win his next three matches to earn a spot on the podium.

"It was amazing," he said. "As soon as I won the fourth match that allowed me to place, I just had a big smile across my face.

"Just getting my hand raised in that fourth match, it's a moment where you kind of see all the hard work pay off. I got to look out in the stands and see everyone cheering for me."

Tavoso now has his sights set even higher.

"As soon as I was in the car driving back home, I knew if I could get sixth my freshman year, I can keep working and win a state title in one of these upcoming years."

He credited his teammate Kruse for elevating the entire program this year.

"He's always working hard in the room and everyone kind of feeds off his energy. He's always breaking down the huddles and always giving the team some inspirational words before every match and meet," Tavoso said.

Hayes anticipates Tavoso will have a similar influence in the program over the next three years.

"I think that helps our room in terms of what the expectations are and what we want to do as a wrestling program here at Hinsdale Central," he said.

Kruse, wrestling at 170 pounds, won his first match but subsequently was defeated by wrestlers who would go on to place second and third overall.

"I knew everyone that was down at the state tournament was going to be a good match," Kruse said. "I was really just excited to be there in Champaign and I just wanted to go out there and enjoy the experience and wrestle to my full potential."

The biggest moment of the meet happened before the competition even began, he said.

Enjoying the sport has been key to his success, he said.

"I always try and have fun with it, because wrestling is such a tough sport, and I think one of the reasons I did pretty good this year is I had a lot of fun with it," he said. "The team was a lot of fun."

Hayes said Kruse continued to improve during his four years at Central.

"He got better every year in high school. He continued to stick it out and tough it out," Hayes said.

Kruse, who started his wrestling career at 119 pounds, grew mentally as well as physically while at Central, his coach said.

" 'Happy for Ron' is not enough to describe it," Hayes said. "I'm very proud of his career.

"He's a great overall kid - a great example of what to do on and off and the mat."

Kruse, who will not compete in college, said the state meet was a fitting conclusion to more than a decade of competition.

Senior Caroline Klobach qualified as an individual in the all-round state gymnastics competition and came home with a medal in bars.

She finished sixth in bars with a score of 9.4 at the state tournament Feb. 21-22 at Palatine High School. Her top-10 finish in bars in the all-around competition Friday earned her a spot in the finals on Saturday.

"I felt very good about it," Klobach said. "I was happy to end that way. I think especially for bars, it was my best meet, and it was nice to end up at the finals for my last year."

Warm-ups Saturday did not go as well as she had hoped, she admitted.

"After warm-ups I was a little worried, but then when I went and competed I was able to do everything how I wanted to," she said.

Although Klobach was the only Central gymnast to qualify, she wasn't the only Red Devil at the meet Friday. Several of her teammates were there to support her. 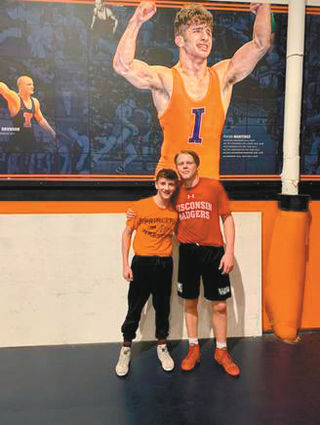 "It was just really nice and comforting to have them all there, and knowing they were there to cheer me on, it was a good feeling and it made me feel more excited to compete," she said.

She finished 25th in the all-around competition with a score of 35.925.

Head coach Kim Estoque said Klobach spent much of her junior year working to get back after recovering from surgeries and injuries.

"This year she was able to advance her skills and perfect them," Estoque said.

She praised Klobach for her work ethic and her leadership on the team.

Klobach said there's no one moment from the meet that stands out. She just appreciates the experience as a whole.

"It was really fun," she said.