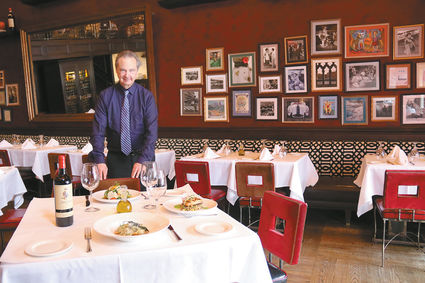 Il Poggiolo general manager Scott Jordan said the special menu was assembled with items from restaurant's regular menu, which he expects will appeal to repeat patrons and newcomers.

The second annual Hinsdale Restaurant Week is just about ready to be served up, and village eateries are preparing a bounty of fare and special prix fixe menus to gave patrons' palates something to celebrate.

The event, sponsored by Hinsdale's economic development commission, runs from Sunday to Sunday, March 1-8, and involves 10 Hinsdale restaurants (see the following page for a full list of participants and their special offerings.}

One of the culinary establishments taking part is Il Poggiolo at 8 East First St. The Italian ristorante and bar will be serving a four-course prix fixe dinner for $38 that reflects the heart of its cuisine. General manager Scott Jordan admitted to some tension when designing the restaurant week menu between enticing guests with unique, limited-time dishes or letting diners experience flavors and dishes faithful to Il Poggiolo's regular menu. He and chef Saul Maya landed on the latter.

"It's great when we can showcase different items, but if it's not items we typically do, and then guests come in and ask for that and we don't have the ingredients, then we fail," Jordan said.

The first course is an arugula salad with roasted peppers, artichokes, a lemon vinaigrette and shaved Parmesan. The pasta is a spinach and ricotta-filled tortellini with brown butter, fried sage, pine nuts and parmigiano. For the fish dish, grilled salmon is served over farro with corn, sweet peas and quinoa.

Maya said his featured dishes were inspired by the upcoming transition from winter to spring, with patrons preferring lighter fare.

"We know it's almost springtime, so we did a grilled salmon with sweet pea shoots and sweet corn so it's balanced and not too heavy," he said. "The salad is the same thing. It's a nice spring/summer salad, very light to lead people into the second course."

The tortellini is made in house with a brown butter sauce that is not too filling. And that's important because diners need to save room for the tiramisu cup dessert, with mascarpone cream, pistachios and espresso-soaked lady fingers.

Maya said restaurant week is nice shot in the arm for his kitchen crew and convenient for patrons.

"It's always fun to do something new," he said. "(Customers) don't have to look through the main menu, just look at the restaurant menu."

Jordan expects the dishes to be well received.

"These are items that are very well put together and do well," he said. "We're excited."

The hope with Hinsdale Restaurant Week, Jordan said, is to both attract people from the local area as well as elevate the village's profile as a dining destination throughout the wider Chicago metropolitan area. Being on a train line is a notable advantage in drawing people from the city.

"Nobody has to walk more than a block or two when they get off the train," he said. "It's good for everybody in town."

The event is also great excuse for those who might not have eaten out in a while to let someone else do the cooking. He thinks people are often surprised at the familial atmosphere they encounter.

"It's nice to see newer people," he said. "It's not just about dining. It's also a social experience." 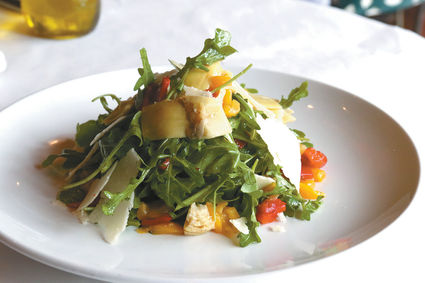 An arugula, roasted pepper and artichoke salad, spinach and ricotta-filled tortellini and grilled salmon are all part of the Hinsdale Restaurant Week prix fixe dinner at Il Poggiolo March 1-8. Ten restaurants in town are participating.

Jordan said he enjoys seeing five-star reviews on social media for the restaurant's food and service. And he noted the importance of catering to patrons' individual needs when it comes to food allergies and other dietary restrictions.

"We certainly go out of our way to accommodate our guests. I think that's truly important, especially in a small village like Hinsdale where you do have that repeat business," Jordan said. "People really are more conscious about what they put in their bodies, and it makes us as restaurateurs have to be more on our toes, which is a good thing."

In addition to the prix fixe dinner, Il Poggiolo offers a $15 three-course prix fixe lunch as part of its regular menu.

Jordan encouraged people to make the most of the week by trying as many eateries as schedules allow.

"Check out all the restaurants," he said. "Support your local businesses."

No tickets, passes or coupons are necessary for Hinsdale Restaurant Week. Reservations are recommended.

These eateries are participating in Hinsdale Restaurant Week March 3-10. For details, visit https://www.hinsdaledining.com.

• 10 percent off any take home and bake pizza dinner special

• add cannoli or tiramisu dessert for $3