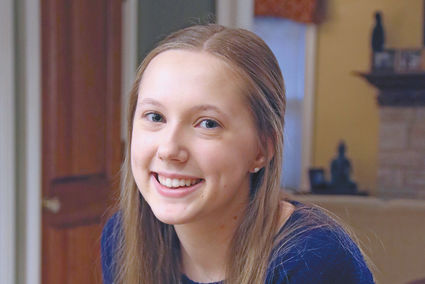 What has a hearing impairment taught you?

Hinsdale's Kayleigh Excell doesn't communicate with sign language or have trouble verbalizing her thoughts. The Hinsdale Central senior's limited hearing in her right ear, however, does require the use of a hearing aid, concealed by her long hair.

So when she asks others to repeat something or speak into her left ear, the response can be less than sympathetic. And the fact that her hearing aid is equipped with Bluetooth has been knocked as a sign of privilege.

"Some people make me feel like I'm not really deaf, because they can't tell," Excell said.

To help people understand the challenges of so-called invisible disabilities, Excell will give a talk as part of the [email protected] event Saturday, March 7, at Hinsdale Central (see Page 28 for details).

She seized the opportunity to participate in the program, which was inspired by the website featuring influential online talks by experts on a wide range of topics.

"I was initially drawn to it because, ever since I was little, I've been watching TED talks. The people giving them always seem to be so eloquent about whatever they're talking about. It's always been my dream to give a TED talk of my own," she said.

She is the only student presenting amidst talks by several PhDs. But the polished veteran of Central's highly accomplished forensics team is in her element, having already delivered a speech on invisible disabilities. And the theme for this year's sessions, "Hiding in Plain Sight," provides the perfect platform to share what she's learned on her journey.

"I already have been researching invisible disability discrimination and obviously have dealt with it my whole life," she said. "I've always felt like I was kind of hiding (my limited hearing). This is a topic I've become knowledgeable about through my own experiences and hearing other people's stories."

Those with more overt physical or developmental challenges, while not necessarily free from discrimination, are often given accommodations based purely on exterior cues. That courtesy, Excell said, is not always extended to her. She recalled one instance during a in-class screening of the film "Twelve Angry Men" when she misunderstood part a piece of dialogue and was the subject of ridicule.

"Sometimes people don't realize that what they say is hurtful," she said.

Excell is thankful to have a 504 plan at Central that helps her overcome barriers, like being given priority for seats at the front of the classroom. Her teachers also are given a wireless FM (frequency modulation) device to wear that transmits their words directly to Excell's hearing aid.

"Ever since I told teachers (about my hearing), they've been super helpful making sure I get all the notes I missed," she said, recalling the awkwardness of constantly raising her hand in class when she was younger to request for something to be repeated. "For the most part, people are willing to change their behavior if I tell them."

Excell, who intends to study astrophysics in college, hopes to convey the importance of a compassionate community.

"I think a lot of people think that asking for help is a weakness," she said. "Everyone needs help once in a while."