Police employing education, enforcement and Narcan in their effort to stem the tide 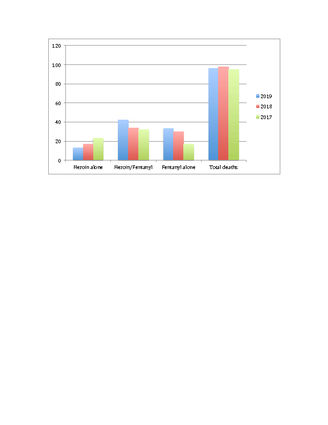 “I think putting the deaths in context is more significant,” he said. “If you look at the number of people in town — the fatalities related to overdose — in 2018, three Hinsdale residents died of overdose.

“Even though the number is low, the significance is huge,” he said. “There is nothing else in our community that is killing young adults at that rate. We don’t have 20-year-olds in that number dying of alcohol-related crashes or diseases.”

Heroin is much more prevalent in the western suburbs than some might think, King said.

“Some young adults say it’s easier to get heroin than alcohol because alcohol is so largely controlled,” he said. “One of the issues leading the heroin epidemic is heroin is easier to obtain and it’s cheaper than probably any other time in recent history.

A short drive east on Interstate 290 and $10 is all that is needed to purchase a bag, he said.

“More importantly, it doesn’t necessarily carry the stigma it used to carry with this younger generation of kids,” he added.

The fact that heroin can be snorted now — and no longer requires the use of a needle — has made the drug seem less frightening. But many who start snorting soon find themselves injecting as they feel a greater need for a more intense high, King said.

The opioid epidemic can’t be viewed through the single lens of law enforcement, King said.

“Occasionally people want the police department to totally view this as a public health emergency. We kind of view it as both,” he explained. “If you are distributing heroin in the community, we will arrest and charge you. If you are in possession, we will charge you.”

He pointed to the May 1, 2019, arrest of Wasim Rashan, 27, of Burr Ridge following the fatal overdose of 23-year-old Lauren Tandy of Hinsdale — the death mentioned above — from heroin and fentanyl. Rashan has been charged with one count of drug-induced homicide, a Class X felony, and unlawful delivery of a controlled substance, a Class 2 felony.

“I know this is not a situation we are going to arrest ourselves out of,” King said. “I also know, over the course of my career, many people, who were it not for the fear of consequences, would not have sought the treatment to overcome this disease.”

“The opioid epidemic continues to destroy the lives of too many DuPage County residents,” he said. “The influx of potent synthetic opiates, including fentanyl, has increased significantly and now represents a higher percentage of illicit drug usage and cause of death than heroin alone.

“I and my office remain committed to continue our efforts to fight against this plague through education, support of drug treatment and the DuPage County Narcan program.”

Hinsdale police are working to educate residents by speaking at churches and to community groups.

King said he tries to enlist a community member affected by opioids to join him. Last year, he and Hinsdale resident Louis Lamoureux, who lost his son to a heroin overdose in 2016, gave a talk at Hinsdale United Methodist Church. (See the accompanying story for more.)

King said he has three points he tries to convey to parents.

“We want people to be informed, not paranoid,” he said.

2. Clean out the medicine cabinet.

“The pathway to heroin use for young adults often starts with the medicine cabinet right at home,” he said.

King encouraged parents to be mindful of teens and young adults who might seek relief from mental health struggles by taking their parents’ prescribed pain medications.

“Be attentive to those anxiety and depression issues,” he said.

Unused pharmaceuticals may be dropped off in a bin housed in the police station lobby.

“If you end up having issues with children that have an opioid or heroin addiction, understand that you do not walk alone,” he said. “There are many people that have already experienced what you are experiencing.”

Police can help parents connect with others who have had a similar journey. King also encouraged parents to have the courage to confront their kids.

“I’ve had parents talk about how they instinctively thought something was wrong, but they were willing to accept the denial until it got to such a point that it became a real issue,” he said. “Talking to your kids is probably the No. 1 thing parents can do.”