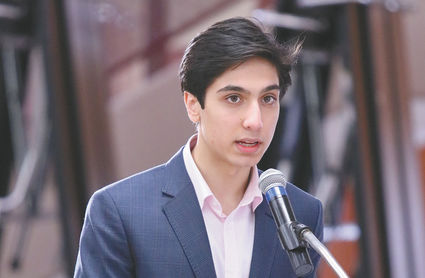 The Hinsdale Central cafeteria was transformed last week into a political stage for a Republican U.S. Senatorial debate.

But the event wasn't the product of DuPage County GOP coordination. It was arranged by Central students themselves, specifically the Student Conservative Organization and its leader, junior Mikhail Essa.

"Our purpose for today's event is to bring voters insight into a very important election," Essa said in his remarks to open the debate.

Hosting such a high-profile forum was quite a coup for Essa, who launched SCO in October 2018 with the help of teacher Mike Ivancich as faculty sponsor. Essa said it took legwork to pull off, but the group was determined.

"We felt really confident we could do this. We knew we had to do it," he said. "We went out and kept networking until we were able to meet all the candidates on an individual level."

A couple of the candidates made the trip from their downstate bases, and several complimented SCO for arranging the debate. Essa was also able to enlist Hinsdale resident and former state Rep. Patti Bellock to serve as moderator. Bellock praised Essa and the SCO's mission.

"It allows for all the youth to be a part of the process," she said, before joking about her lack of involvement in arranging the debate. "I did nothing except to tell them that the microphones worked."

A couple dozen of local citizens turned out, as did several county GOP officials and candidates in other races. Along with broader issues like economic growth and health care, candidates were asked, fittingly, for their positions on boosting school safety. All expressed staunch support for the Second Amendment, but there was divergence on the idea of arming teachers. Gaps emerged elsewhere, too.

Differences are healthy, Essa suggested in an interview after the debate. He said he founded the group to foster more political discourse among students.

"I think it's definitely important to keep everyone engaged. It's something that can actually impact someone's future," he said.

Boone Bracket, a fellow junior and SCO member, said that while the SRO members lean conservative, the hope is to cultivate a more robust discourse among those of all political stripes. Democratic U.S. Rep. Sean Casten has been a guest speaker as has a student from Marjory Stoneman Douglas High School in Parkland, Fla.

"We wanted to bring in more speakers to have more open discussion on all the issues," Brackett said, noting an attempt to host a debate for the Democratic candidates was unsuccessful. "We're not trying to convert people to conservatism. We're trying to promote civic engagement and open people's minds to a full and honest debate."

Following the GOP debate, Essa characterized attendance as "decent" but lamented the lack of students in the audience. He noted the challenge of getting on his peers' radar.

"I don't think it's always realistic to get a lot of students. Some people aren't passionate about it. We just give them the opportunity to get involved," he said.

But he was heartened by those who did come and were edified.

"A lot of students really enjoyed that and felt like this is probably something they wouldn't have known so much about if we wouldn't have put this event on for them," he said.

Brackett said all progress needs to be celebrated.

"We're a relatively young club, but we're making a huge impact in the community. I think it was a really good thing for the community," he said. "We are just trying to provide as many opportunities as possible and say, 'Maybe I should go check this out and see what thy have to say.' "

He encouraged students to educate themselves about issues and candidates, saying one doesn't need to be a political junkie to raise awareness.

"It doesn't matter what you believe or how little or how much you know. Just come out and figure it out," he said. 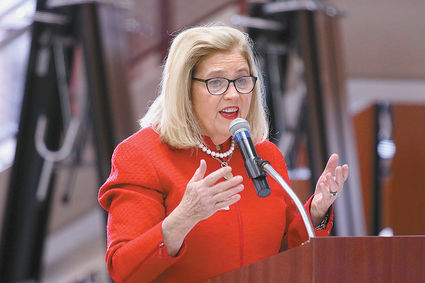 The long-range vision is to lay a lasting foundation for the organization by ensuring underclassmen are in place to carry it forward.

"It would be awesome to come back in five to 10 years and to see the club still thriving and doing theses same kinds of activities," Brackett said.

Essa encouraged his classmates to consider the way elected leaders can shape their future prospects.

"I'm going to be working soon and I'm going to be raising a family soon. I want to make sure the country is a place for me to become financially independent and become successful," Essa said.

As for the near term, what's next on the agenda for Essa the SRO? A debate between the GOP nominee and Durbin. It's safe to say a lot of people in the Central community would vote for that.