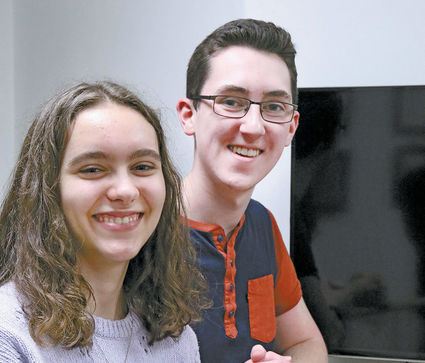 SARAH LOTSOFF and brody melia LOTSOFF STARTED ACTING IN SEVENTH GRADE, melia in fifth • HER dream role IS CAROL KING IN 'BEAUTIFUL,' HIS IS JOSEPH IN 'JOSEPH AND THE AMAZING TECHNICOLOR DREAMCOAT' • both are considering a career in theater

Hinsdale Central seniors Sarah Lotsoff of Hinsdale and Brody Melia of Westmont are no strangers to the stage, having acted in plays since middle school.

The two will make their directorial debut tonight in the drama department's winter performance of two one-act plays, which runs through Saturday (see Page 22 for details).

After Central teacher and director Erin Lundin selected the two to direct, their first task was to choose their plays.

"She gave us suggestions and said, 'I think this style would suit you,' " Lotsoff said. "We actually didn't plan it, but we ended up with two plays from the same writer."

That writer is Paul Elliott. Lotsoff selected "Mind Games," which tells the story of a troubled young man who comes to believe that all of his problems - and his entire existence - is something he made up, including his therapist.

The two, who have appeared on Central's stage numerous times as actors, have enjoyed directing their peers.

"It's been really interesting," Melia said. "I've worked with so many of them when we're all acting. This way, I was able to see where their strengths were. In many cases, I was surprised."

Lotsoff said she was a bit hesitant at first to assume that authority over her friends, but she has found it rewarding.

"They respond well to my suggestions and they listen," she said. "It's more a collaborative effort."

The two agree the time they have spent on stage has been beneficial as they tackle directing.

"I think it's really helped me because I can really understand the thought process that actors go through because I've been there," Melia said.

Both also agree directing is harder than it looks.

"You don't know how what you say is going to stick with the person you're giving suggestions to," Lotsoff said. "I have to make sure that I know what I'm saying - and that it's something I really want to see on stage."

Melia has appreciated having another student director to lean on. "We've been talking a lot and it's been great to talk to someone who is in the same shoes as me and we can bounce ideas off each other," he said.

Lundin had nothing but praise for her protégés.

"I have been so impressed with how they have handled everything," she said. "Brody has so much fun with his cast every day, but he's still giving them great ideas. He's still in charge.

"Sarah is looking so carefully at everything happening in her script and I can see she cares so much about this being as accurate as possible and as interesting and as moving as possible," Lundin added.

Lotsoff is grateful to Lundin for giving her and Melia this opportunity. "This has been one of the highlights of my time at Central," she said.