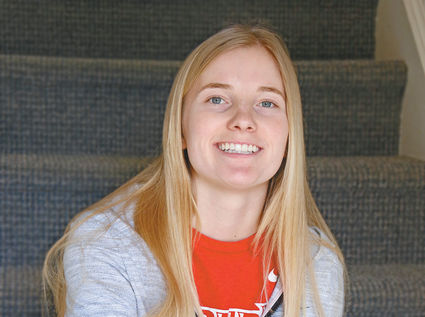 Alix McArthur is the first recipient of the Julie K. Heidecke Award to hail from Heidecke's hometown of Hinsdale. McArthur credits Heidecke's parents for their dedication to the soccer programs at Central and Illinois State University and for keeping their daughter's memory alive following her 1998 death in a car crash. (photo by Jim Slonoff; photo provided)

McArthur had worked at the Julie K. Heidecke Tribute soccer clinics while she was a student at Hinsdale Central.

The name of the late Central graduate became even more familiar to McArthur when she began playing soccer at Illinois State University, following the same path Heidecke had. Julie died in 1998 at the age of 19 in car accident.

"There is a little memorial right outside the gate before you walk in (Adelaide Street Field)," McArthur said. "Before every game, we touch her stone, because she was our 12th Redbird on the field."

Now McArthur is the recipient of an award that bears Heidecke's name. She said she was surprised when she first heard the news in December, a month before she was officially recognized at her team's senior banquet.

"I was surprised and super excited and honored," she said.

The award is given each year to a member of the ISU women's soccer team. McArthur is the only recipient to share Heidecke's hometown.

"I think it's an honor to be able to bring it back to Hinsdale, because I'm the first one from Hinsdale Central and Illinois State to have it," she said.

Soccer has been a part of McArthur's life since she was a toddler, although she doesn't remember her early days in AYSO at age 3.

"My parents told me when we moved here that I saw kids playing (soccer) at the park and I said, 'I want to do what they're doing,' " she said,

In fifth grade, she began playing with the Oak Brook Soccer Club, where she competed until she left for ISU. When she headed down to Normal for her freshman year, McArthur had a dream of playing for the Redbirds - but no spot on the team.

"I wanted to play college soccer," she said. "I looked at D III schools, but I wasn't really interested in them. I fell in love with Illinois State for their academics, and it was a dream to play soccer there.

"I knew I wanted to be a physical education teacher, and Illinois State has such a good program, it's hard to turn down," she added.

Although it hadn't worked out for McArthur to join the team as a freshman, she reached out to the coach, who told her to keep in touch.

"I probably drove him crazy. I kept emailing him like they said," she related.

Head women's soccer coach Brad Silvey remembers those emails - and meeting McArthur when she was still in high school.

"I remember Alix when I went up and did some of the Heidecke clinics. I remember seeing her at some of the camps that we hosted on our own campus," he said. "I remember getting those emails."

Silvey, who transitioned from assistant coach to head coach in spring 2017, initially told McArthur the roster was full.

"One thing led to another and we ended up pulling her into the office and at least having a conversation," he said. Later she was invited to train with the team.

"It was kind of a tryout phase," she explained. "I wasn't officially on the team - I had to make the team."

McArthur was a bit naive at first, Silvey said, but willing to do anything she was asked.

"There was no way we weren't going to have her be part of the program," he added.

"It was the best experience I've ever had," she said. "D3 sports, balancing academics and athletics is hard enough, but they had so many resources for you in both aspects that I was successful because of it."

She gained skills in organization and time management, she said, and a deeper appreciation for community service.

"They put us in the community. They made sure we were getting our school work done," she said. "They helped me be a better student, a better athlete. It was an unforgettable experience."

Making friends and traveling with the team were two of the highlights of her three years on the squad.

"They are just memories I will have forever," she said.

She encouraged any high school student who is thinking of continuing in their sport to do so.

"Just don't be afraid to reach out," she said. "It's never too late. Honestly anything can happen - just keep putting in that extra work. If you want something, go after it. You never know until you try."

McArthur was determined to earn a starting spot on the team and had done so this fall, Silvey said.

"Unfortunately, as fate would have it, she ended up having a career-ending injury on the game she started for us," he said. "That was a really big hit for the team, just to see her go down and not be able to contribute on the field."

The ACL tear caused McArthur to miss almost half of the season.

"It happened in September. We were in Florida. I planted to swing and kick the ball and (my knee) just gave right out. I knew right away," she said.

She credits the surgical skills of Hinsdale's Dr. Charles Bush-Joseph and the compassion of a teammate who tore her ACL a week earlier for getting her through the injury. 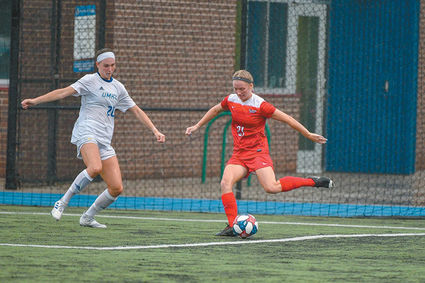 "We were kind of in the same place at the same time," she said of her teammate. "I had someone to talk to."

McArthur said while she was playing she tried to embody the characteristics she knows Heidecke did - dedication, positivity and leadership.

According to Silvey, she succeeded.

"Alix is a warrior first and foremost," he said. "I've told her time and time again that she's actually a hero of mine in terms of the way that she has pursued opportunity."

Even after her injury, she remained an important part of the team.

"She still found a way to lift and inspire and be a positive force on our team," Silvey said. "I could sit here and talk all day about Alix. I think she's just remarkable."

Hinsdale Central: three-year member of the team, member of the 2016 super-sectional team, back-to-back conference champs in 2015 and 2016, earned All-State special mention in 2016

Family: daughter of Douglas and Lesley McArthur; has a twin brother, Jamie (will graduate in May from the University of Iowa)