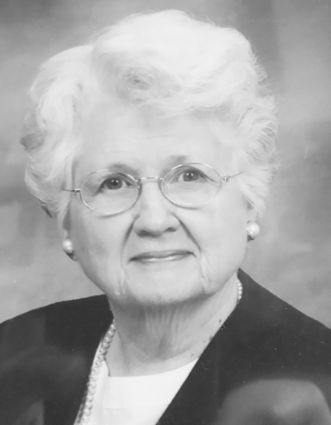 Gretchen was born in 1924 in Hinsdale to Sigfred and Helen (Swanson) Karlson. She graduated from Hinsdale High School and attended Monmouth College, where she met her future husband, Willard "Wick" Wasson. While at Monmouth, Gretchen became a member of Kappa Delta Sorority and was elected War Bond Queen as part of campus fundraising efforts during World War II.

On Feb. 9, 1946, Gretchen married Wick and they enjoyed 58 years of marriage until his death in 2005. She was a devoted wife, mother, and homemaker who enjoyed these roles immensely. When the children were older, she also worked outside the home in the role of activities director at local skilled nursing communities.

Service to her church and community was extremely important to Gretchen. She was an active member of the Presbyterian Church, most recently at the First Presbyterian Church of Downers Grove where she served as a deacon, elder, wedding coordinator and on numerous church committees. She was a member of the Presbyterian Women, Downers Grove Woman's Club, and PEO Sisterhood. Gretchen was also a dedicated volunteer for the Girl Scouts when her daughters were in school. She served as a leader in local neighborhood troops and also led a troop of at-risk girls in an urban neighborhood.

Through the years, Gretchen pursued a number of personal interests. She and Wick loved to travel and especially enjoyed exploring Europe together. They also made several adventurous trips to Ambergris Caye in Belize. Gretchen was an avid collector of antique furniture, dolls, demitasse silver spoons, vintage postcards and all things Swedish.

Gretchen's family were the longtime owners of the former Karlson's Shoe Store in downtown Hinsdale.

The family wishes to extend its sincere thanks to the pastors of Hinsdale Covenant Church for their ministry to Gretchen these past months and to friend Jodi Barry, who provided unfailing companionship and loving support to Gretchen for many years.

She was preceded in death by her husband, Willard J. Wasson; her brothers, Robert Karlson and Richard Karlson; and her brother-in-law James (the late Virginia) Wasson.