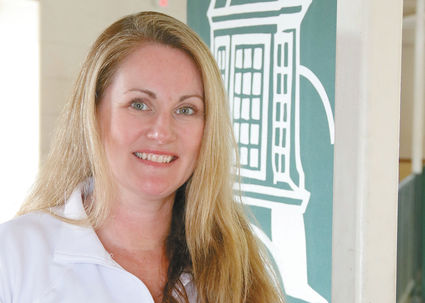 ave to guess how they're performing. This coach doesn't sugarcoat it.

Yes, teams. The Hinsdale mom of three daughters coaches each of their squads. That makes for busy winter weekends with games on Saturdays and Sundays. But she prefers that to the alternative.

"I'd rather coach than sit in the stands," Pacioni remarked.

And she believes girls appreciate being pushed to do things that once seemed out of reach.

"These girls have a really strong competitive spirit, and they want to be coached the same way that parents coach the boys," she said. "And that's how I coach them. I'm very tough on them."

With daughters in fifth, third and second grades, Pacioni tailors her approach. But all her charges have the importance of personal responsibility impressed on them.

Winning is nice, but the exponential jump in confidence is the real payoff. "The amount of progress over the year is remarkable," Pacioni said.

Chicago was intended to be a temporary stop in her professional progression with Boeing, moving here from her native southern California for a two-year assignment.

But love intervened when she met Mark.

"I stayed. I didn't want to leave," she said, finding Midwest virtues to outweigh the weather woes. "I really like the people out here."

And they liked her, to the point that she was asked to head up the Vote Yes for HMS group in 2016 in support of the Hinsdale Middle School referendum. That Pacioni-coached team effort resulted in victory.

"I like a good challenge, so I really dug in and I researched how to do it," she said. "This was probably the most rewarding experience I've had in volunteering or my professional career. Everyone was just so wonderful to work with."

Keeping her fledgling hoopsters on task takes a mix of discipline and affirmation, Pacioni related.

"I think you have to be extremely encouraging," she said. "You have to be able to balance being fair and letting everybody get a shot at playing and being strategic in getting your team to where you want them to be."

Pacioni especially delights in helping girls discover abilities they never realized they had.

"I like to see kids that normally don't think they're any good at a sport," she said, citing one player who learned to use her stature to her advantage. "It was just so good to see the smile on her face and the confidence that she had."

The basketball season goes into mid-March. No break, though, because softball kicks off right after - and guess who'll be coaching her girls.

"They're not going to be here forever. You have to be in full-on Parent Land," Pacioni said.