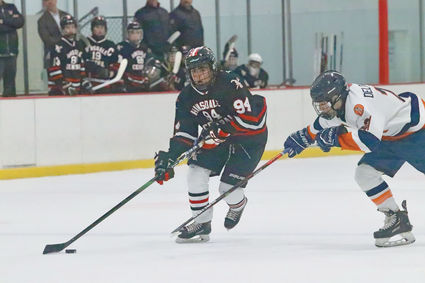 Christoper Araujo looks for a teammate up the ice. Central coach Jim Swoyer said the team's previous back-to-back losses were an instructive experience. "Being able to accept it, deal with it - not like it - and move forward, because that what happens in life," Swoyer said.

The action was heating up at the Willowbrook Ice Arena Tuesday night, boards rattled by the slam of the puck, followed by the much larger crash with the impacts of players furiously chasing it.

The Tuesday night match-up pitting the Hinsdale Central Hockey Club against Naperville North could be seen as one of redemption for the Red Devils after dropping the previous two in the Illinois West league playoff tournament. The team hadn’t lost two consecutive games all year, the result of a winning mindset, according to Central coach Jim Swoyer.

“We talk a lot about our championship culture,” Swoyer said. “It’s much more about the process and about getting the guys to be a team and do the things it takes to win.”

Even in the team’s heartbreaking defeat to Waubonsie Valley on Saturday, the coach liked what he saw.

“I thought that was a championship-type game that they played. A few little breakdowns, and not everybody had the best play at every moment,” Swoyer remarked after the game. “This is obviously a down. Part of that championship culture is dealing with adversity. Adversity is good.”

It’s certainly been less frequent this year than in seasons past. The program’s 22-2 league record gave Central the regular season title and signaled its ascension to the upper echelon of Illinois’ high school hockey hierarchy. Underscoring that were two nonconference performances: a 4-3 comeback victory over a formidable Providence squad in October and a 3-3 tie against third-ranked St. Viator ­— nearly a win but for two St Viator goals in the closing 24 seconds.

Senior Will Misicko said team chemistry has been key to the squad’s surge, starting with a preseason team-building trip to Wisconsin.

“We all really feel like a family,” he said.

“Sophomore, juniors and seniors, we’re all together. We all love each other,” he said.

Swoyer, now in his third year leading the program, said that attitude takes intentionality to cultivate.

“There’s a common goal,” he said, stressing that the sole focus is not on winning. “It doesn’t happen in one year or three years, we know that.”

Goalie Ben Ognibene said that camaraderie translates to more selfless play and an infectious energy. He said that energy is starting to permeate the broader school community.

“I think this year we’ve had the most fans than any other year,” he said, citing the Jan. 31 game when more than 100 students turned out. “It’s fun playing in front of the kids we go to school with.”

“We love it when our fans come out and support us and hearing people talk about it at school,” he said.

He marked the Providence win as a catalyst for the team’s subsequent prosperity.

“That gave us the momentum swing of the season,” McCormick said.

Mom Michelle Cutinelli has two sons in the program — junior Clay on varsity and Sam on JV. She said the sport has been part of her family’s routine since elementary school.

The intensity is palpable as Central takes a slim 1-0 lead over Naperville North into the second intermission. The Zamboni circles the ice as the placid voice of John Denver fills the arena, a contrast to the fierce, hard-hitting action that will soon resume.

Before the game, the team learned that they’d been ranked 11th in the state, setting them up well for the state tournament that comes next. Their opponents are aware of the rankings, too.

“We know every time we walk on that ice, every team is bringing their best game,” Swoyer said.

The third period commences and almost immediately the Huskies score the equalizer. But the Devils aren’t bowed. Top scorer senior Jack Ferrino rockets a slapshot that finds the back of the net, and Central scores two more to bring home the 4-1 win.

Dad Pete Boomer, who’s son Charlie is a junior on the team, said winning brings more attention, and that helps motivate Charlie and his comrades.

“Playing for the school with all the kids cheering for him, it’s just fun. It brings a sense of community to the sport,” he said. 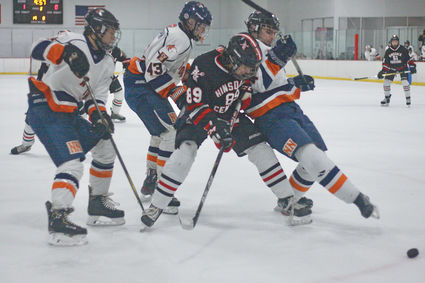 Clay Cutinelli finds himself surrounded by Huskies during Tuesday night's game, a 4-1 win for the Red Devils.

“For our JV and varsity teams both to finish in first place is a great thing,” he said. “We want seventh and eight-graders to be thinking, ‘This is the destination.’ ”

Swoyer emphasized that Hinsdale is a hockey town, listing off several prominent NHL figures with village ties. Every year he helps construct the rink in Melin Park, which, although the mild conditions have thwarted efforts this winter, has been a important gateway for the club.

Misicko exhorted people to come out for the team’s next game at 4:10 p.m. Sunday against Maine Township.

Asked if there’s been highlight of the season for him, Ognibene hesitates.