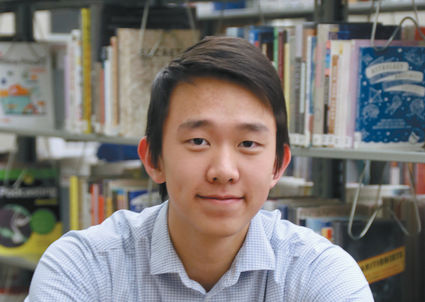 Herbert Wang said his love of science is something his father began fostering when he was just a child. Rather than quiz his son on the periodic table or test his knowledge of mathematical theories, Jin Wang asked a simple question, over and over again: "How does it work?"

The curiosity and knowledge that resulted from asking and answering that question time and again is what Wang believes led him to where he is today - the laboratory at University of Chicago. That's where, as a research assistant, he discovered a biodegradable material that can be used as an alternative to plastic food packaging.

"I have a patent for the material," said Wang, who was working to create an artificial skin for use in wound care when his research changed course. He said the material, created by combining polymers found in rice flour and shrimp shells, has antibacterial properties that can help keep food fresh while offering an earth-friendly alternative to plastic.

Once funding is in place, Wang hopes to see his discovery used to create straws, plastic wrap or some other marketable packaging product.

Wang began spending time in the University of Chicago laboratory the summer after his sophomore year of high school. That summer internship continued the next summer and has spilled over into nearly every Sunday since.

"I like making things," said Wang, who said time passes quickly when he's absorbed in his lab work.

Wang learned in January that he was one of 300 high school seniors to be named scholars by the Society for Science and the Public. The organization's annual international math and science competition drew almost 2,000 applicants from more than 750 schools. Wang and Hinsdale Central will receive $2,00 each.

"You're trying new things out to form a new dish," he said, and rather than facing a scholarly board, your discoveries are reviewed by family and friends.

His specialty is fried rice, which he likes to make using whatever ingredients are available.

"That's my signature dish," he said.

By the time he enters college, Wang will have another title to add to his already lengthy resume. Having completed his final project, he's in the final steps to the rank of Eagle Scout.

For his final project, Wang turned back to the question he was asked throughout his life to teach a group of Elm School students how microscopes work. Using a 3D printer, he created microscopes to fit the students' iPads. Wang said he hopes the students will use the microscopes to start asking themselves how things work and, like him, go searching for the answers.