Twenty-six girls are on the varsity cheerleading squad this season at Central, about half of which are shown here cheering on the boys basketball team Friday night. The girls have almost three dozen cheers to use during games.

That's how long Hinsdale Central cheerleaders and pommers performed at the Pack the Place pep rally Friday. But each four-minute routine involved several songs, dozens of girls, weeks of practice and countless steps.

"We started working on it in November," said Franny Lucente of Hinsdale, a senior on the cheerleading squad and one of its leaders. "We practiced four times a week (except for winter break) and then we've been working on it ever since."

Lucente started cheering in fifth grade with Falcons Cheerleading. She continued through eighth grade and also was a cheerleader at Hinsdale Middle School in seventh grade. She's been on the football and basketball squads all four years at Central and said her level of experience is not unusual.

"Most of us started in middle school with Falcons," she said. "Only one or two people come on every year with no experience, and we kind of take them under our arm and get them to learn all the skills."

Coach Ilyssa Hoffman, who is in her ninth season of coaching at Central and sixth as head varsity coach, said the number of girls who try out varies from year to year. But earning spot gets harder as students get older.

"It definitely gets more competitive as you move up to varsity," she said. "The frosh-soph team is usually a little bigger than the varsity team. Obviously we look for increased skills and certain skill levels to be able to make the varsity squad."

The squad cheers at all home boys and girls varsity basketball games and at select away games, Hoffman said.

"This coming month there are two away games that are happening on Friday nights, but no home games throughout the week, so we chose to go to those away games," she said.

Cheerleaders have more than 30 sideline cheers in their repertoire and also prepare cheers with stunts or tumbling to perform during the first and third quarters. And then there are the bigger routines, for Pack the Place and Homecoming pep rallies and games.

Because so many girls are involved in each stunt, making adjustments to a routine if someone is hurt or sick takes a significant amount of time. Perfecting new stunts takes time, too, she said - which means the cheerleaders have to start preparing for the pep rally long before the pommers do.

"It's always funny to see," Lucente said. "We're all jealous. The pommers will practice twice a week and they learned their whole thing in three days."

The pommers do learn quickly. That was evident from Monday afternoon's practice in the cafeteria, where the girls were learning a routine to "Finest Hour" to perform Feb. 7.

But their routines - just like the cheerleaders' - require a lot of preparation time, senior co-captains Olivia Parrillo, Sofia Malamazian and Rachel Thompson said.

"It's a lot of meeting up at a house on a Sunday (or) Saturday, and we basically start with picking a song, cutting the music," said Parrillo, an Oak Brook resident. "We meet up and then we'll choreograph until we run out of ideas."

The three estimate they spend about a quarter of their preparation time choosing a song or a mix.

"The music is the hardest part," said Thompson of Hinsdale. "We need music that gives us a good kick line."

Then they devote another six hours to choreography. There the challenge is making each routine look fresh.

"That's something we've been working really hard to do this year," Parrillo said. "We kind of have a repertoire of our basic signature moves. We try to minimize the amount of those that we put into each dance."

The three all started taking dance lessons when they were kids and did so until sophomore year, when they decided to focus on poms.

"It's really rewarding dancing at halftime and just hearing the crowd hype us up in the kickline," said Malamazian, who lives in Clarendon Hills.

Like the cheerleaders, pommers perform at all home boys and girls varsity basketball games. 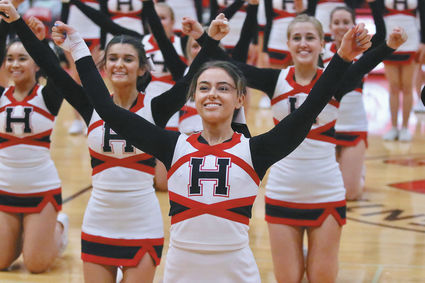 Central seniors Alexandria Hui (from left), Franny Lucente, Sofia Rosas and Olivia Fallon pump up the crowd at the Pack the Place pep rally. Lucente, an experienced flyer, said she still gets nervous. "Right before you go up, it's so nerve-wracking. Once you hit the stunt and you're up there, it's a lot better," she said.

As a result, the girls have to make bigger time commitment than coach Maeve Andrews did when she was in poms at Central. Practice time isn't the only thing that has changed since Andrews graduated in 2010.

"It's increasingly gotten more competitive," said Andrews, who went on to dance at Miami of Ohio. "Most of the girls do come from a competitive background and we have a lot of girls try out every year. I think that's why it's starting to get more selective than when I was here."

For the students and their coaches, the relationships they form are one of the biggest rewards. Hoffman started as a freshman coach at Central and has worked her way up to junior

"I've been able to work with the particular group of girls since they were just starting out," she said. "I've been able to see them grow and develop their skills. I really enjoy the relationships that I'm able to build with the girls over the years."

"I definitely love all the friends I've gotten to meet," she said. "I think we're really close after spending four years together."