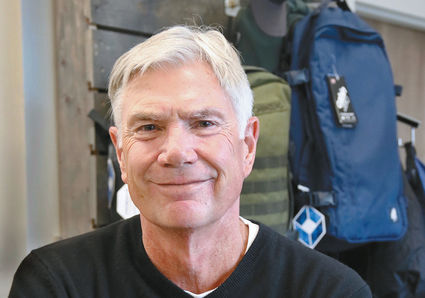 Buzz Kaehler, third-generation owner of Kaehler Luggage, is marking the company's 100th birthday with special events throughout the year. In February, customers are invited to trade a gently used bag for a discount coupon toward a new Briggs & Riley bag. The donated bags will be filled with new items and given to women transitioning from domestic violence shelters.

Locks on steamer trunks don't last forever. That simple fact was the start of a family business that's been around for 100 years.

Kaehler Luggage got its start when Walter Gustav Kaehler, a Chicago locksmith, saw potential in not just fixing the trunks commonly used by travelers in the early 1900s, but selling them.

"He got the brilliant idea to start stocking steamer trunks and opened up a store in Evanston," said Buzz Kaehler, the founder's grandson and the business' current owner.

A century years later, Kaehler Luggage is still a family-owned company dedicated to providing quality travel gear. Rather than wooden trunks, the Kaehler Luggage of today is a purveyor of the latest styles in luggage and other gadgets that make being away from home a little easier.

"We think of ourselves as travel enhancers," Kaehler said.

Even as a child, Kaehler spent time working at the family business, but he had no intention of following in the footsteps of his father or grandfather. That was until 1979.

"I saw the opportunity to take what was really a good business and grow," Kaehler said. A fresh MBA in hand, Kaehler returned to the luggage company and soon introduced its first computer. Soon, he began expanding the business to additional locations, including Hinsdale.

Kaehler Luggage opened its Hinsdale store in 1985. But when the building that originally housed the store on East First Street was to be town down, the business moved out. With a new building finally in place at 28 E. First St., Kaehler returned to town just a few years ago.

"We're happy to be back," Kaehler said.

To Kaehler and his team, travel doesn't have to involve long distances.

"We define travel as any time you leave your house and have to take stuff with you," he said.

Backpacks, briefcases and lunch boxes to ease a worker's daily commute are all part of the Kaehler inventory.

Along with high-quality, innovative travel products, Kaehler said his family's company has always promised the best in customer service. Staff members know the products they sell and are happy to help customers find just what they need. Sometimes, that's a product they didn't know existed until talking to Kaehler's staff of experts.

Travelers visiting a Kaehler store in Chicago, Winnetka, Highland Park or Hinsdale will find brands like Tumi, Bric's and ZincFlyte, a line of children's luggage that's equipped with a built-in scooter for on-the-go entertainment.

"It's a unique product that's not available in many places," Kaehler said.

As the family business enters its second century, it also welcomes its fourth generation. Buzz Kaehler's daughter, Lisa, has joined the team. She can sometimes be found assisting customers at the Hinsdale store, carrying on the business that her great-grandfather began.

Most products are available through the company website, but Kaehler said he believes the neighborhood storefront, home to travel gear and experts, will always be important.

"There are a lot of people who like to touch the luggage, to work the zippers," Kaehler said.