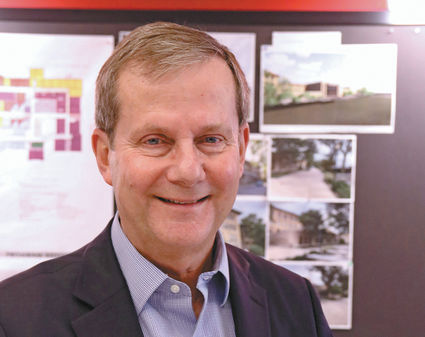 John Ochoa HAS LIVED IN HINSDALE SINCE 1987 • GREW UP on CHICAGO'S SOUTH SIDE AND ORLAND PARK • University of Illinois–Chicago GRADUATE • serves ON D86 FACILITIES COMMITTEE • FATHER TO John, Christopher & Peter • GRANDFATHER TO 6

From his Oak Brook office at FGM Architects, John Ochoa can gaze into the past.

Specifically, Ochoa can see Mid America Plaza at the corner of Route 83 and 22nd Street, which he helped design early in his career.

"That was very significant project when I was a young architect," the Hinsdale resident said. "It was a big project and kind of grew my confidence at the time in terms of the scale of projects that I could work on and could handle."

Shortly after the building's 1985 completion, Ochoa responded to a help-wanted ad from FGM, then steadily rose through the firm's ranks from project manager to president to, ultimately, being named chairman/CEO in 2018. The firm's projects primarily are of the public sector variety, so his portfolio abounds with schools, fire stations and park district facilities.

"Literally, every day, thousands of people go to work or go to school in buildings that we designed," he said. "They make communities stronger."

His leadership role affords him regular opportunities to open clients' eyes to what's possible and spur his staff on to strive for the best.

"You find out that (the job) is really about managing people, and motivating teams to do hard things," Ochoa related. "You help them see things that they weren't able to see themselves and build something that's really transformative for them and their organization,"

With an interest in drawing as an adolescent and exposure to work sites through his father's work as an electrician, Ochoa knew architecture was the blueprint for his career.

"I'm very blessed to be able to work in the profession that I always wanted to be in," he said.

He and his childhood sweetheart, Karen, settled in Hinsdale, not surprisingly picking a fixer-upper he could sink his technical teeth into.

"We bought probably the ugliest ranch house on Quincy Street," Ochoa said. "We were living in the midst of renovation for probably 10 years."

His three boys provided ample Little League coaching and Boy Scout leader roles, and he also served as vice chairman of Hinsdale's zoning board of appeals.

Last October, he was presented with the Gold Medal Award from the American Institute for Architects Illinois for outstanding lifetime service.

"It was humbling," Ochoa said of the honor. "There are a lot of good architects in Illinois. I think it's really a tribute to a lot of the strong people that I work with."

In memory of a former colleague lost to breast cancer, Ochoa in 2002 founded the FGM/Susan Nealey Endowed Scholarship at the UIC School of Architecture. This year FGM marks its 75th anniversary, and Ochoa said there is something gratifying about having a lasting impact on the surrounding community.

"You build things and they're there for a long time, and you get to see what you worked on in a very tangible kind of way," he said.