It's all downhill for these families

Grieves, Risingers among Hinsdale residents who get a lift out of skiing 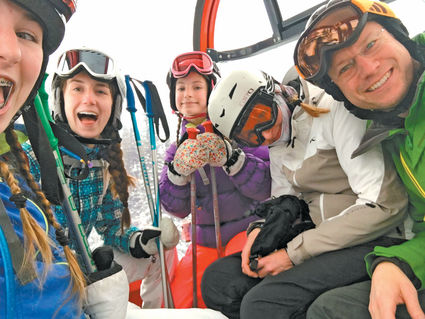 The Risingers, daughters Marilyn (from left), Grace and Maggie, and parents Beth and David, enjoy their chairlift ride at Jackson Hole, Wyo., in 2016. The Grieves, dad Andrew (clockwise from top right), Ethan, Colin and Elizabeth, also make skiing a family affair. "We like active trips much more than sitting on a beach reading a book," Andrew said. (photo provided/Jim Slonoff photo)

Forget sun-drenched, sandy oceanside winter escapes. Head for the higher elevations, where a little windburn is harmless and precipitation is the desired forecast.

That's the perfect travel plan for some Hinsdale families this season, downhill ski enthusiasts that embrace the season of snow. We talked to the Grieves and the Risingers about the joy that rises within them as they descend the slopes.

Elizabeth Grieve, 15, finds such fulfillment in skiing that she's trying to evangelize her friends. She recently gave lessons to three of them, hoping to broaden her pool of slope companions.

"Now they kind of understand why every year we go to a colder place (for school breaks)," Elizabeth said.

She was introduced to the sport at about age 7 by her dad, Andrew, on a father-daughter excursion to the Rockies. With instruction, Elizabeth progressed quickly from green runs to black diamond and mogul courses. The combination of breathtaking scenery and exhilarating descents earned her devotion.

"It's really peaceful being out in the mountains," she said. "It's a really unique sport, and it's really rewarding because you can kind of go at your own pace."

Andrew didn't get serious about skiing until his early 30s. That's when a company trip brought him to the Rockies for the first time.

"I was really intimidated, having only been skiing ice in Wisconsin," he said. "I got out there for the first time and just fell in love with it. The snow is so much better, and I found it so much easier to learn."

A few years ago son Ethan, 9, joined in on the family fun. He said ski school set him on a solid foundation.

"We found ourselves in the middle of the run, and we were like, 'This is pretty hard!' Andrew said, turning to Ethan. "But you made it, right?"

"I was a little scared," he admitted with a smile.

"There's a great diversity in the terrain, and they almost always have really good snow," she said.

Mom Julie has gotten back into skiing in the last few years, and youngest son Colin, 6, has now started taking lessons.

Andrew said as much he enjoys skiing, he's come to relish the chairlift rides together just as much.

"It's 15 minutes of no phones and me and the kids, just time to ourselves to talk about whatever," he said.

Much like the binding on a ski, Julie said the sport has proven to cultivate strong links.

"As the kids grow up, it's an activity that they'll still be interested in," she said. "And it's something we can do together."

David Risinger grew up skiing the slopes of New England, making the trek with his three brothers from their Connecticut home. His wife Beth, not acculturated to the world of skiing, quickly adopted the pursuit.

"We used to go up in the winter to Vermont, and she really grew to love it, even though she did not start skiing until she was 23," David said.

Before moving to Hinsdale six years ago from the East Coast, the couple and their three daughters would get the entire week of President's Day off.

"We started going out to Steamboat, Colorado, and they did ski school out there, and that's where they learned to ski," she said.

"It's a great family experience because the kids get to challenge themselves, and everybody gets something out of it," David said.

Grace, a freshman at Bucknell University, said the weeklong ski school was no, uh, slalom in the park.

"I do remember being with all boys, and I was pretty intimidated. We skied pretty hard trails, but you learn so much," she said. "I didn't really understand how much how I was learning."

Maggie didn't take to skiing quite as readily. Beth remembers dropping Maggie off at ski school only to get a call shortly thereafter about an inconsolable child.

"I just remember seeing her be absolutely miserable," she said. "It can be a challenge when the kids are young."

But Maggie's not miserable anymore. Even suffering a broken leg while skiing in 2016 wasn't a deterrent.

"It didn't scare me from skiing again," she said.

"It's wonderful to see it," Beth said of Maggie's development. 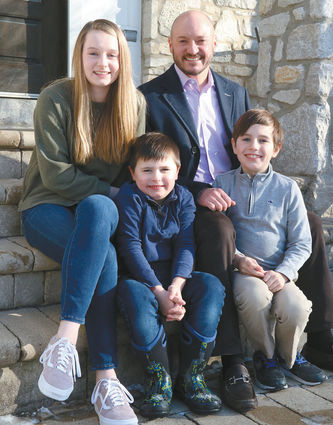 Beth said she's gone through a kind of skiing evolution herself, from living on the skier's edge before having kids to harboring fear of getting injured in mid-age. But now she's in a new phase.

"This past year I really enjoyed it again, and I'm anxious to ski again," she said. "I really like being outdoors. The air is so clean and crisp, and you are exercising."

The family is in agreement that middle daughter Marilyn, 17, wears the crown of most passionate skier. Grace said Maggie, who will attend Boston College next year, has already made their school break plans.

"I have a friend with a vacation house in Park City (Utah), and Maggie said, 'I don't care where you want to go for break, me and you, we're going to Park City,' "