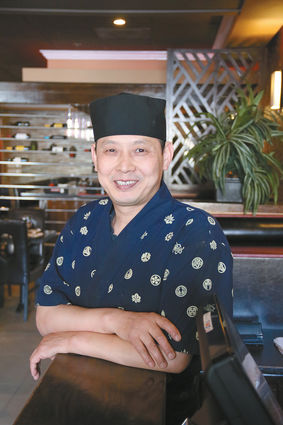 At Hinsdale's Wild Ginger, Chef Cheng Hu's sushi mastery has helped the restaurant connect with local diners and propel it into its sixth year of business.

Saturday may be the Chinese New Year, but at Hinsdale's Wild Ginger Asian restaurant, owner Lisa Fang is celebrating her establishment's sixth year of serving dishes from China, Thailand, Japan and more.

"We kind of do a little bit of everything," she said. "Some like the Thai food better, others like the hibachi."

Both have been popular this winter at the 44 S. Washington St. eatery. The Thai seasoning packs a lot of heat, and foods grilled on the traditional Japanese hibachi stove convey a sense of warmth.

"Also soups, like the coconut curry soup is a good seller, and the miso soup," Fang reported.

Finding the right recipe to attract the community's diners was a challenge upon opening in September of 2014, admitted Fang, who moved here after operating a similar restaurant in Murfreesboro, Tenn. Early customers expected the cuisine to be predominantly Chinese.

"The first two years was a little tough because we were new to the area," she said. "(Customers) came in and they looked at the menu and didn't see a lot of Chinese choices."

Gradually patrons' palates were won over by the pan-Asian theme, serving up something for everybody.

The variety also allows for seasonal adjustments, like the correlation between the rise in popularity of the restaurant's sushi and the rise of the temperature.

The sleek decor reflects the modern menu with an inviting sushi bar beyond the dining room set off by an wine bottle wall array. Wild Ginger offers wine specials on Wednesdays and Thursdays along with other discounts to bring in the weekday diners.

"On Monday and Tuesday we have 30 percent off on sushi and appetizers. That's attracting a lot of customers," Fang said.

On weekends the restaurant welcomes a lot of families - fried rice is a favorite among the kiddos - and high schoolers and middle schoolers stopping in for a post-class meal.

"The come in and grab a snack like rice, sushi or a roll," she said.

"We do a lot of takeout service, especially during football season. People like to stay home and eat," Fang said with a smile.

The restaurant prefers to do its own delivery to ensure the order arrives "hot and fresh."

"All the meat and veggies come in fresh daily, so we prepare in the morning for the whole day," she said.

Fang named the Thai spicy basil as among the tops with adults along with hibachi-prepared items, evidence of a health-conscious clientele.

"(Hibachi food) is grilled, with a lot of veggies and doesn't have a lot of oil," Fang said.

"We don't like to keep changing, because when you change, each chef's food tastes different," Fang said.

That goes for the front of the house staff as well, she related, which helps to build continuity and familiarity with patrons.

"Customers like the service. The servers have been here five years, so when the usual customers come in, they know what they want to drink," Fang said. "It's like a family to them."