Red Devils receive support before and after games, practices from certified trainers 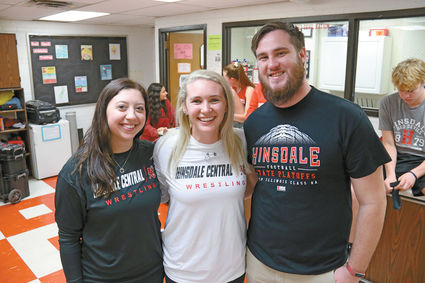 The athletic trainers office is quiet from 2 to 3 every afternoon - a great time for staff to check in with parents, prep water coolers for games and practices, and make sure supplies are well-stocked.

Then the bell rings and the after-school rush begins.

On Tuesday afternoon, it's not long before the space is filled with kids. Some use resistance bands to stretch or wrap a heating pad around a sore knee. Many need to have a wrist or ankle taped. One member of the girls basketball team announces that something is wrong with her shoe. A wrestler wanders through looking for his shoes.

Senior Maiwen Amedgadjie, center on the girls basketball team, is here because she sprained her ankle two weekends ago at practice. The trainers have iced, taped and massaged her ankle and given her stretches to do at home. Their recommendations worked, she said, noting she was able to practice on Wednesday last week and compete on Friday.

"It was a pretty quick recovery," she said. "If you just listen to what they say, you will be fine."

Head athletic trainer Alex Kennedy and her assistants, Dillon Hock and Sam Bell, all can identify with the teens they treat. Kennedy played softball for all four years in high school, dislocating her knee twice.

"The first time, I was like, 'I don't want to talk to my athletic trainers. They are going to keep me on the sidelines,' " she recalled.

The second time, when she was forced to talk with them, she realized they had the same goal she did.

"Oh, you guys don't just take people out. You help them get better," she said.

That's the message she and her coworkers have been trying to spread.

"The longer we've been here, we've been able to talk to more coaches," Kennedy said. "We're not here to sit them out. We're here to keep them playing in a healthy way."

Bell, who started in August, said she had a great experience with her athletic trainers as a volleyball player in high school and college.

"They were kind of the ones that inspired me to go into this field," she said.

Hock, who played three sports in high school and continued with soccer and volleyball in college, said his experiences as an injured athlete make him a better trainer.

The injuries the Central trainers see range from a broken nail to life-threatening conditions.

Bell had her first experience with a significant injury only two weeks into football season, when a player came in with two broken bones in his forearm.

"I knew right away his arm was not supposed to be looking like that," Bell said. "You're prepared for it, but it's different when you see it in real life."

Hock said the most serious condition he's seen is compartment syndrome. It occurs when a trauma causes blood to pool in one of the body's "compartments," most commonly in the lower leg. Untreated, it can cause the loss of a limb - or the loss of life.

"Basically the muscle and everything in the compartment expands beyond what the fascia can hold," he said.

Recovery time for the student-athletes varies, depending not only on the type of injury but on the individual, Kennedy said.

"Everybody heals a little differently," she said. "We do have those kids who sprain their ankle on a Wednesday and they are full game ready on Friday.

"Then we have those kids who sprain their ankle on Monday and they are out for two weeks. It's very much an individual thing. As athletic trainers, we try to promote that healing process as best we can for the athlete."

When asked about injury prevention, she said stretching is important, but creating a healthy lifestyle is key. 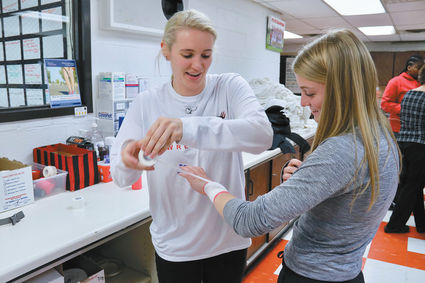 Head certified athletic trainer Alex Kennedy tapes the wrist of gymnast Caroline Klobach while Bell reviews the proper form for some exercises with Francesca Lucente, a member of the cheer squad. The biggest challenge for the three young professionals, Hock said, is that sometimes students see them as peers and coaches see them as kids.

"Sleeping, eating and hydrating well are the three you can control every day and make a big difference," she said.

The trainers all work 40 hours a week, but not on a traditional 9-5 schedule.

"In winter season, the bulk of those hours come on Saturday and game nights," Kennedy said. "Football Friday nights, we're here until about 11 o'clock usually. We do travel with our varsity team. We'll typically come back here after an away game and wait for the boys to come back for treatments, rehabs, consoling after a loss."

Bell said being ready to listen is one of the most important things a trainer can do.

"You can have the biggest impact on them if they're having a bad day and you give them a shoulder to lean on and an ear," she said. "They're able to talk to us about anything."

Kennedy said she enjoys the time she spends at Central.

"High school is what I wanted to be doing, the environment I wanted to be in," she said. "Our athletes are highly motivated. They are ready to go, and it makes this job much easier when they want to play."

Favorite part of job: “I love watching them compete and do well. I think that’s one of the biggest benefits is getting to know the kids here and through practice.”

Career goal: plans at some point to pursue a master’s in exercise and sports science or exercise physiology

Favorite part of job: “The impact that we have on the kids, whether we realize it or not.”

Played three sports in high school, continued with soccer and volleyball in college

Career goal: plans at some point to pursue a master’s, either in sports medicine or in order to teach future athletic trainers

Favorite part of job: “I enjoy just being around the atmosphere of sports. It’s one of the best ways to continue to be around that atmosphere.”