A show fit for an ogre 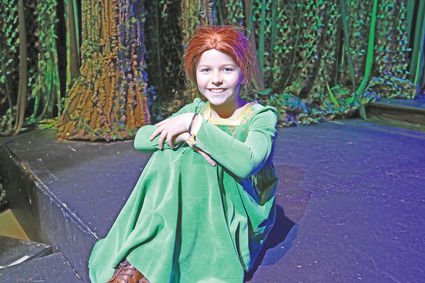 Stage Door Fine Arts' production of "Shrek the Musical" opens at 7:30 p.m. tomorrow at The Community House, with additional shows Saturday and Sunday as well as next week, Thursday through Sunday (see Page 28 for details).

The triple-cast spectacular involves an impressive roster of student performers ranging from those in the early grades to high schoolers. The Hinsdalean talked with three of the cast members hailing from Hinsdale to get their insight on their particular parts in "Shrek" and the acting experience in general.

She's hopeful that a prince will come to save her. She loves the storybooks she reads, and she's happy all the time.

What's fun about portraying her?

I like her attitude and her outlook on things. She's living in a bad environment and makes the best of it.

What do you enjoy about acting?

I like how I can pretend to be someone else and get to express it in music and lines. It brings out a whole other side of me.

This is my sixth show.

"James and the Giant Peach" because it was my first show and loved the whole experience. I thought the set with a fake giant peach was really cool, and I liked all the dances and the songs.

What production would you like to be in one day?

"Hamilton." I saw it over Thanksgiving break, and I thought is was so cool.

I think the excitement and how all the characters evolve, like showing how young Fiona grows up and how much she changes.

I would describe him as a baby. But he also is very melodramatic. He thinks everything is his, yet it's not. Throughout the show he's crafting a devious plan to become king. When he can't get what he wants, he throws fits.

What's fun about portraying him?

It's not really a role you can mess up. Throughout my own childhood, I've acted like a kid. Now I can just do it on stage for fun. And if I act like more of a baby, that's even better. It's a role where you can just be yourself and come up with your own jokes to throw in, if you want to, to add to the drama.

This is my eighth.

We did "Mamma Mia" last spring, when I got to play a shirtless Pepper.

I got into theater like seven years ago. I wasn't naturally good at it. I play hockey, and you wouldn't really associate a hockey player with a theater kid. But when I come to (Stage Door) I can have fun because it's another place where I can be myself and do something that I love to do. It's also helped me develop my interest in theater tech, which is what I'm considering doing in college. I really enjoy the lighting aspect and set construction.

How have you matured in the craft?

I've definitely gotten a lot better at reacting on stage and not just doing what's in the script. So it looks like I really believe in the character.

The sets are great, the actors are great, and I think that both adults and little kids can enjoy it.

I love that she's not afraid to be herself and is very courageous and stands up for herself. There are a lot of movies about princesses not being super-empowered or expressing their true opinions. Fiona is so out there and tells everybody what's on her mind.

She almost inspires me to be more courageous and to accept my thought process and not second-guess myself.

This will be my seventh show. I've been doing shows since I was in sixth grade.

I would have to say "Newsies." The cast just clicked, the set was phenomenal, and the dancing was so energetic. 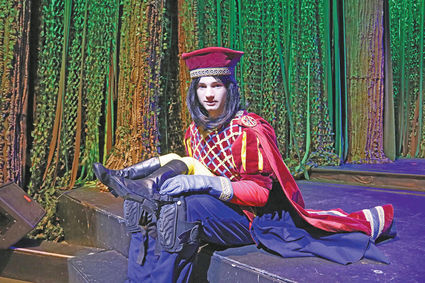 I think it's the cast and the crew, and just the amount of effort that is put into this show. The work ethic, especially of our directors, is absolutely incredible.

Being able to take a step back from our own lives, reach through other characters and communicate a message and bring joy to other people's lives through the power of theater.

What gives you a feeling of gratification?

After the show when we come down in costumes, the little girls are all like, "Oh my gosh, it's Princess Fiona!" That's the most gratifying feeling, knowing that you're potentially a role model to these kids in bringing their favorite princess to life.

To give themselves a very enjoyable break in their lives and come join the magic of Duloc with us!